It has been a busy week, plus I was down and out with a miserable cold (that still lingers…not bad, just annoying in that it is keeping me from going full tilt).  The loveliest part of the week was the morning of our 27th anniversary.  I came down to make breakfast and get the tea kettle boiling, and found this: 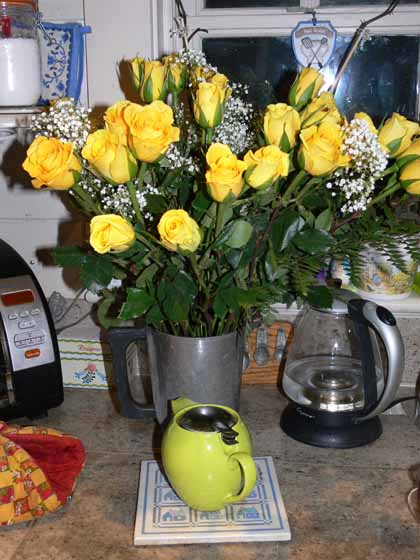 Our anniversary dinner?  Spaghetti and meat sauce–carb loading, easy and fast–getting Eli and the rest of us packed and ready to head out the next day for more wrestling.

Then Saturday was State Wrestling tournament for Eli.   Fortunately, it was only an 80 minute drive away…some years it is held in the western part of the state (alternates year to year) and is 2-3 hours away…ugh!  Anyway, it was a challenging meet.  Eli may be in the most competitive weight class in the state—the top four kids (he was seeded 6th in the state) are all of a caliber that they could place in the top four in all-New-England tournaments.  In his first match, Eli went up against the kid who was seeded first, ended up being state champion in the weight class, and the State Tournament’s Outstanding Wrestler…that is for ALL weight classes, all middle school ages, voted by the coaches of the teams.  Here is Eli (in the red singler) doing his best to fight off the pin–none of us parents could figure out he could arch like that for so long and fight off such a strong opponent: 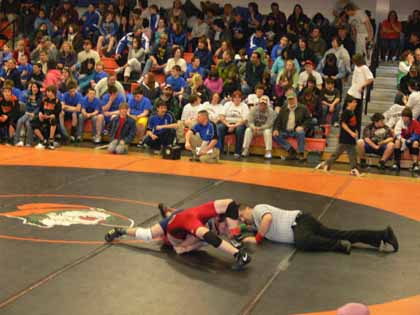 But he succumbed.  The 8th grade girl who beat him in his second match was good, and here they are grappling it out: 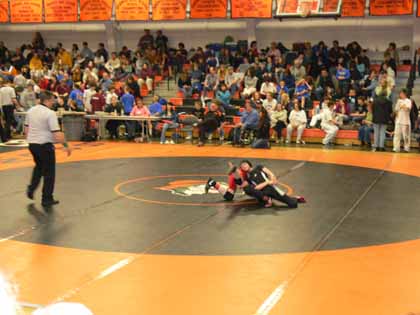 Our team didn’t fare so well, but they made it to states and tried their best.  So now, off to learn more in the coming year, come back next year (alas, all but the girl in Eli’s weight class will be back for another year in middle school!), and try again.  Good job to one and all.
Saturday morning, tho, was one of those mornings where EVERYTHING went wrong.  Discovered that Joshua’s amp had fallen over in the back of my car and cracked the inside back of the tailgate–my brand new beautiful car.  SOB.  It was really cold (high of 31) and the dog needed to stay in the garage as he would otherwise pee and poop in the house during the l ong day, so I took the plug-in radiator to the garage.  When I picked it up, the lip that I grabbed turned out to be a pull out handle, so the whole thing slipped and damaged the base/wheel.  Then the electric kettle I use about five times a day decided to die.  Then the older one was being a typical uncooperative teen and arguing, etc.  I had a meltdown before 8 a.m.  NOT a fun way to start the day.  Fortunately, despite the wrestling team losses, the rest of the day wasn’t awful.  So Sunday I read another Stephanie Plum mystery and hoped my cold would go away.  Soon.  More anon! This week can’t be worse, so it WILL be better.  And I WILL get prepped for teaching in Arizona in two (SHRIEK) weeks….

This entry was posted on Monday, March 29th, 2010 at 9:10 am and is filed under Family, Wrestling. You can follow any responses to this entry through the RSS 2.0 feed. Both comments and pings are currently closed.