What fun we had, even if it was a small class!  More attention for everyone that way.  So the past few times I’ve taught this workshop, I decided I really needed to come up with a couple simpler “test drive” blocks in the 6 inch size that aren’t so fiddly.  I had Taro and Turtle blocks.  Everyone loves the turtle, but it really is pretty challenging.  So I thought I needed more options that were easier than the turtle.  I tried a whole bunch of ideas, but not much fits into a block as small as 6 inches (most students like to try one small before committing to one of the larger class patterns from my Nourish the Body, Nourish the Soul pattern, here) and still makes an interesting design while also being simple.  I thought about what is Hawaiian and would also be Florida?  I ended up with two new blocks: 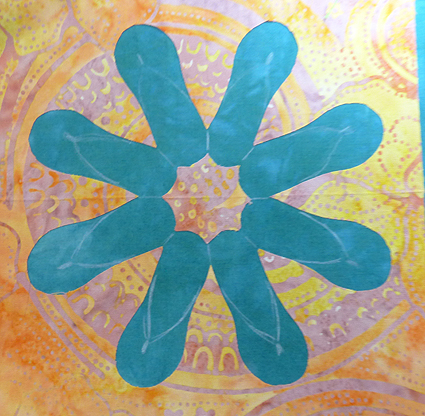 This is the cutout version of Flip Flops–I actually managed to keep one of the new blocks fairly simple.

And the stitched version. I left one flipflop unstitched to show what a difference the thread makes!

The second block is adorable, not as fiddly as the turtle, but not exactly easy-peasy: 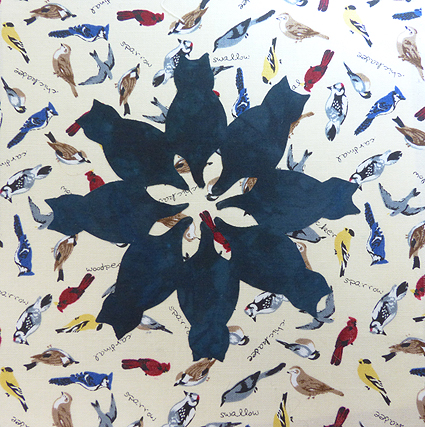 The cut-out version of cats. I liked the whimsy of black cats on bird fabric. But…those busy little birds kinda moosh into the cats.

Red thread to the rescue! I learned when making Under the Bali Sea that thread can save a project–before I added the aqua stitching on the nautilus shells the quilt was SAD. Here, the red totally pops. And we LOVE the kitty-circle! Maybe I should name this the Zeus block in honor of our cat who departed this earth a few days after I got home.

The students in both workshops (how lucky that I had the same workshop in both venues, which were–I did not realize this for a goodly while–HOURS apart) did such a great job with the blocks.  I’m honestly not sure which of these photos were taken which day: 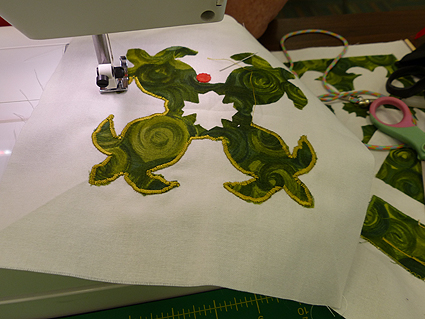 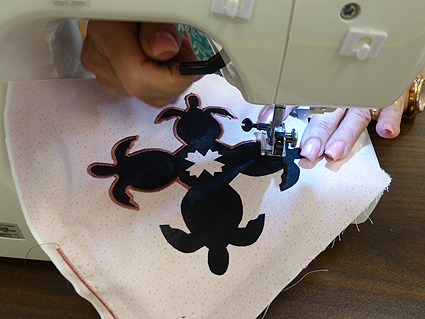 And another set of turtles with dusty pink thread on a pale pink background. 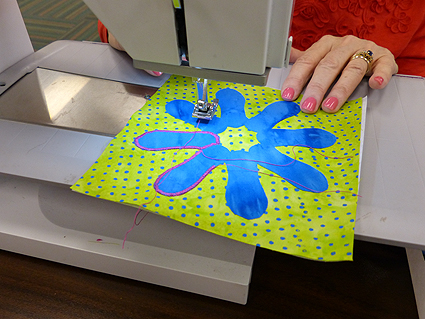 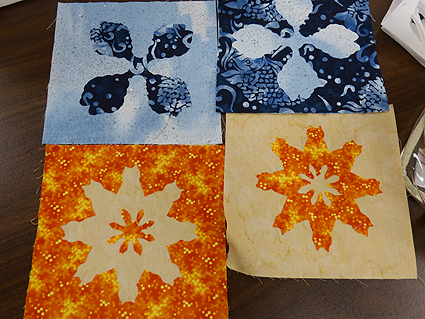 This student got a lot done. She did the taro block, cutting the leaves in the + position instead of the X orientation, but used them as “X” on the second block. AND she got her cats cut out, too! 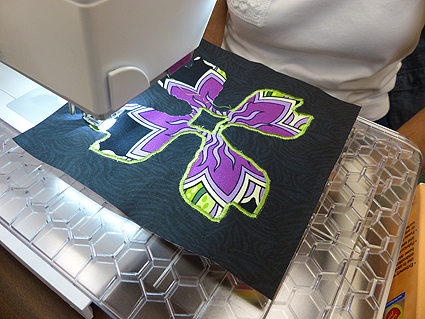 This student brought a gorgeous Jane Sassaman print fabric for her blocks and a black-on-grey background, but learned that in these blocks what is a great combination for piecing may present some challenges in Hawaiian applique. The black background merges with the background. As with the cats, thread to the rescue! She luckily had the perfect green. 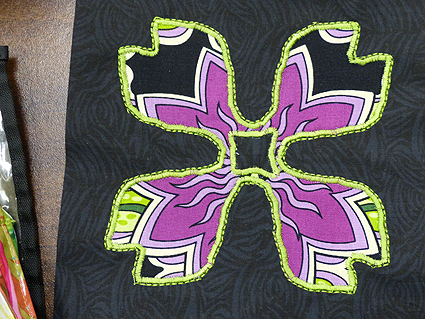 Done! And a great job using the bold straight stitch to accent the outside edge. 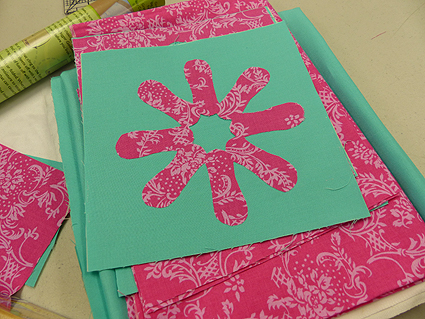 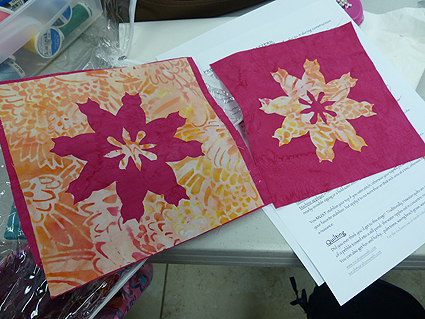 Two more cat blocks…gosh I hope these ladies sent me pictures! The guild president was in the class and was already thinking up a mini-quilts display with the blocks. I TOTALLY WANT PHOTOS Debby if you do this! 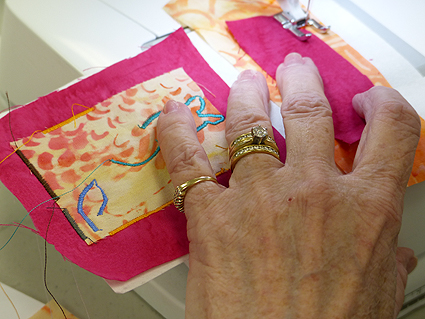 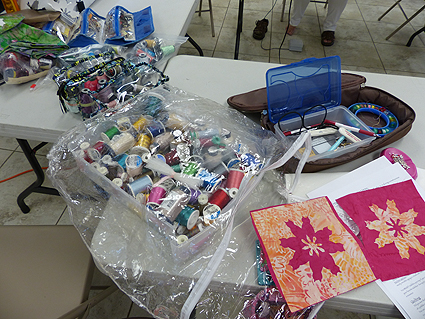 And this student followed the instructions to bring a wide range of threads–it really helped her pick just the right color! 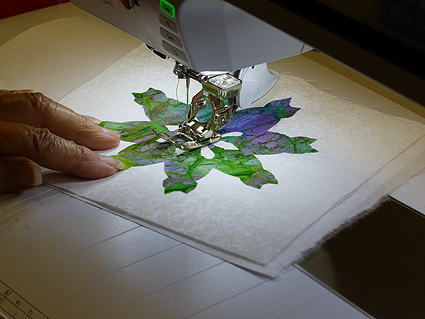 Despite being fiddly, the cat block was a hit. 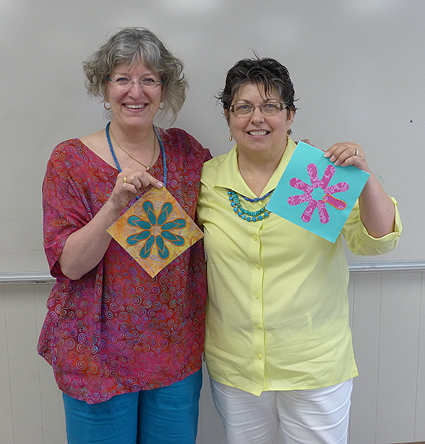 Happy Birthday Marie C.! Hope you enjoyed the giftie tucked into your bag. I sure enjoyed driving from Orlando up to Lakeland and having dinner with you, and having you in my class. Keep in touch!

So as you might gather, it was a FUN class!  The trip home was relatively uneventful compared to the trip down, although my suitcase got soaked in Boston where it was raining not snowing, and a few things inside were soaked.  Luckily, the quilts in the suitcase were inside a ginormous Ziploc Bag (I swear you could fit the contents of a stuffed laundry basket in one they are so big) and protected!  I’ve already ordered a hard-sided suitcase since the zipper pull also got trashed.  Mo bettah!

This entry was posted on Monday, April 20th, 2015 at 6:41 am and is filed under Applique, Hawaiian quilting, Machine applique, Teaching / Classes. You can follow any responses to this entry through the RSS 2.0 feed. Both comments and pings are currently closed.

2 Responses to “Hawaiian Applique in Florida, Part 2: Ladies of the Lakes, Lakeland, Florida”