Getting ready for the next quilt….the herald of summer in Maine 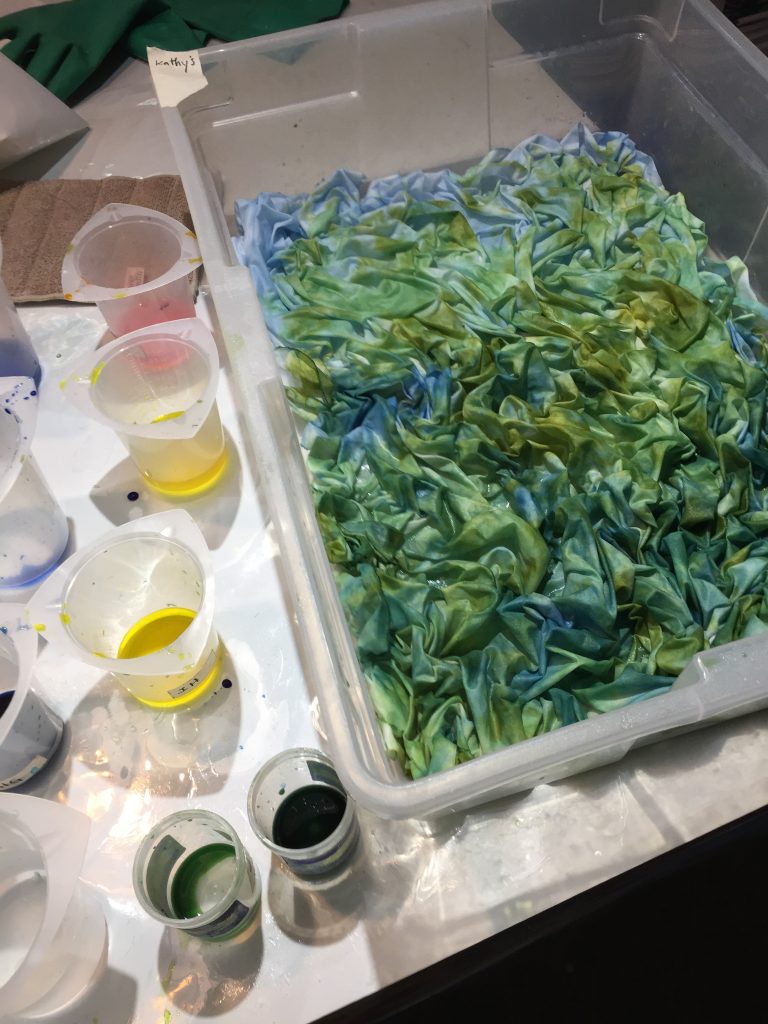 Before I can start in on the fusing and collaging process, I find that I now need to dye fabric specifically for a project.   While working on my Lilies of the Valley Quilt, I used up most of my good “summer” greens.   My next piece is for Explorations at the New England Quilt Museum (in Lowell, Mass.), a regional SAQA (Studio Art Quilt Associates) show.  I’ve had several ideas I wanted to try for this piece, and really wanted to push myself to do something different and unexpected.  Unfortunately, those ideas are just not wanting to fit into the required vertical orientation and size required!   So I’m going to do a large piece on something I’ve been wanting to do for a while:  Maine’s lupines that bloom in late May and early June and herald the summer.

SAQA members from Massachusetts, Rhode Island, Maine, New Hampshire and Vermont were invited to submit a body of work.  If selected, artists would then make a 30×50″ art quilt featuring a specific technique.  We were advised to submit several techniques, so I suggested dyeing, fused collage and machine quilting/threadwork.   I am delighted that I am one of 24 artists selected!  There will be two exhibits of 12 artists each.  We won’t know whether we will be in the Oct-Dec 2018 exhibit or the Jan-April 2019 exhibit until the works are completed and submitted August 1.  That means I need to work FAST!

I was chosen to showcase fused collage.  The exhibit is about techniques, with in depth information and supplementary materials.  From the acceptance letter:

In the exhibit, your piece will be accompanied by a number of items, including your artist statement, a brief bio, a photo of you in your studio, and materials which explain your technique. Each artist has a 20″ x 50″ area that they can use to explain their process. You can use process photos, sample pieces, written materials, even video presentations if you can figure out how to make it work.

But before I can fuse, I need the right COLORS to fuse.   Some years ago I made some cloth that I gave to my friend Kathy, who used it is a fabulous portrait of her granddaughter.   I thankfully kept notes of which dyes I used, and I call this combination “Kathy’s fabric.”  This time, I decided to make it not as dark—summer meadow greens instead of piney woods greens. 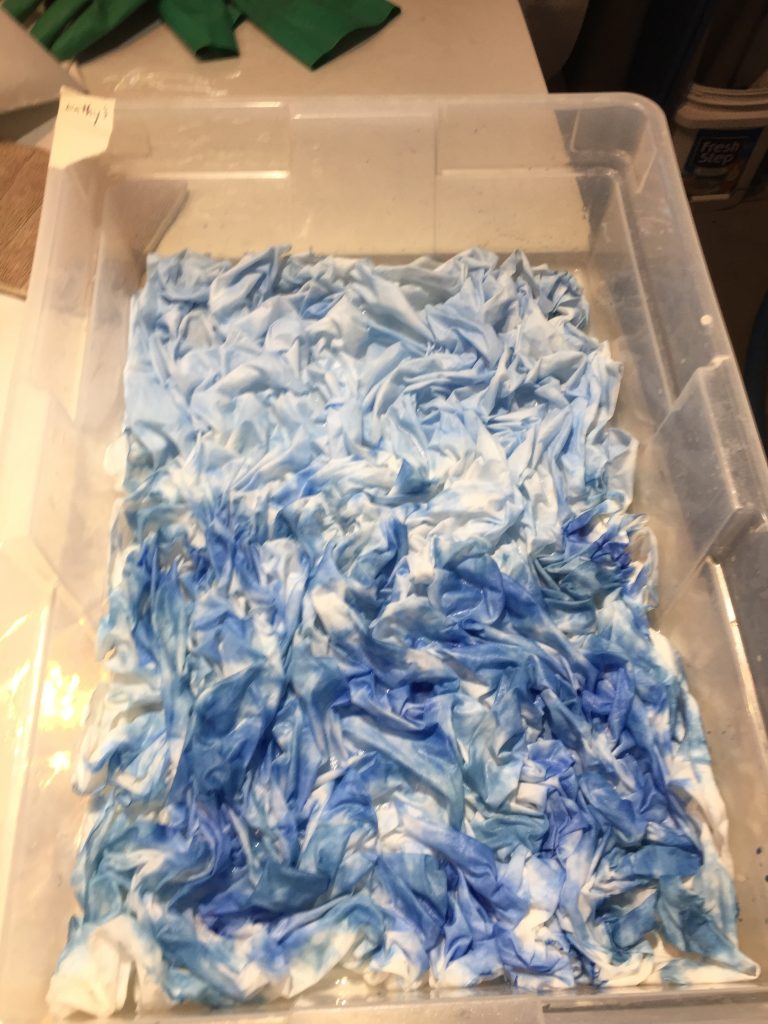 I start by dotting dye on, both navy and basic blue. I literally stick my latex-gloved fingers into the dye and daub it on. MANY classes with Carol Soderlund and many MANY yards of fabric and miles later, I can begin to predict what I will get because I tend to refer to my notes and books from the workshops, then go improv. 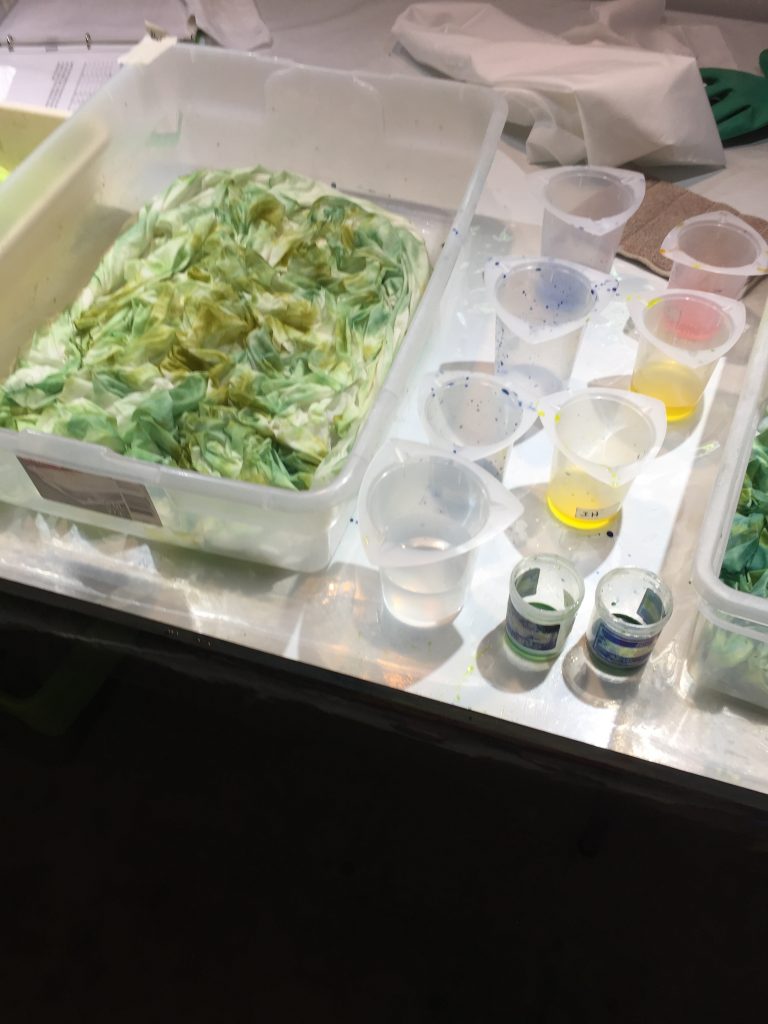 Then I add two or three yellows, because not just one will quite do what I want. Sometimes, I do a second cloth, as here, where I have actually mixed some greens instead of just doing yellow on blue.

For dye geeks, most of the time I prefer to paint dye onto cloth, then paint soda-ash/fixer solution on top, but this time I soda-soaked first, then daubed on the color.  When I want significant patterning, it’s soda-soak first.

The photo at the top of this post is the one which began with blue dots, then yellow, then greens. 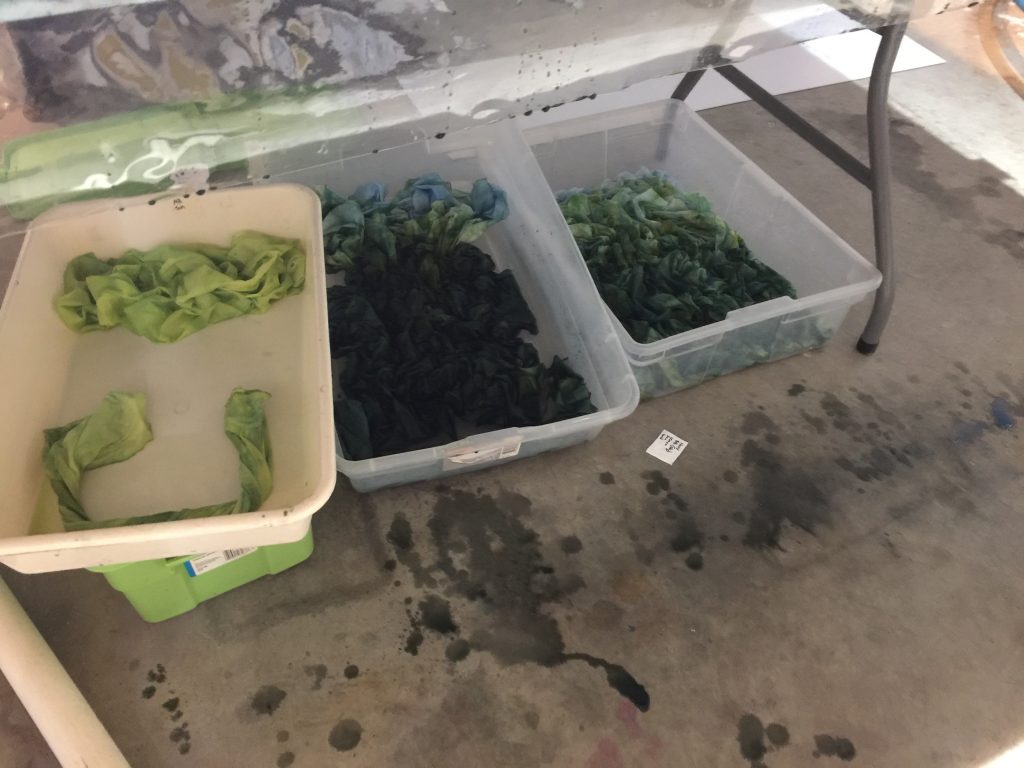 Once I’ve gotten the color on, the fabric needs to batch so it moves under the table for several hours before washout, sometimes (as this time) overnight. Had to make some of my bright spring greens, too.

Then I decided to try to make a field with lupines in it, but blurry, to use as background at the top of the quilt.  I may have messed this one up….. 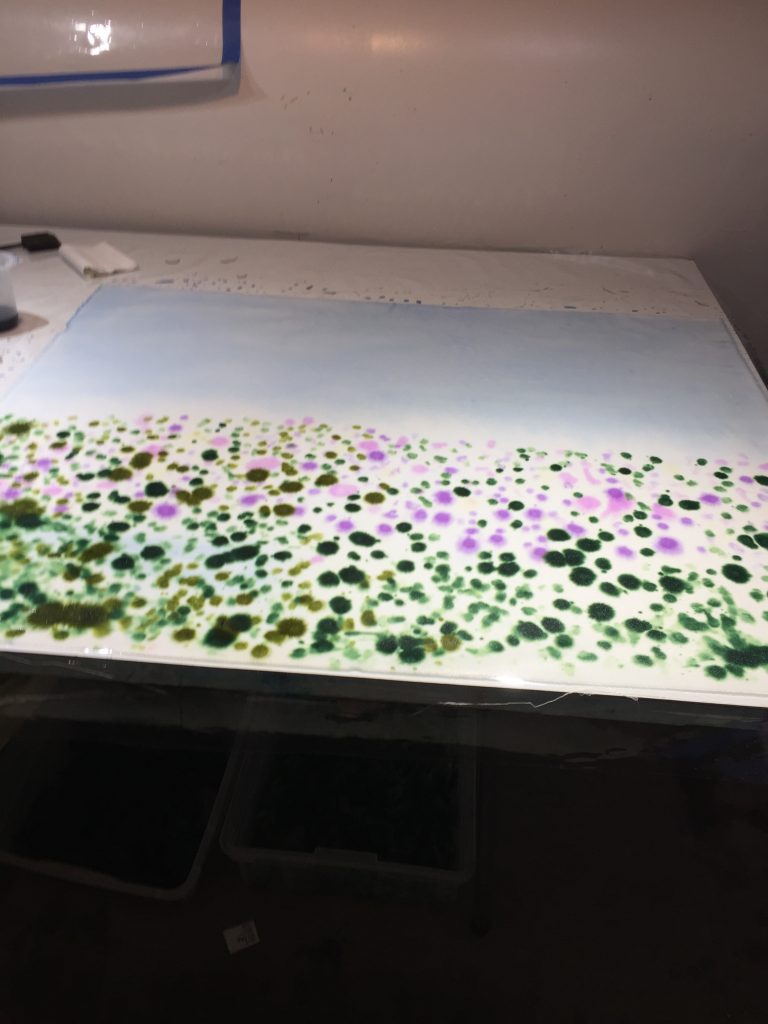 Sky at the top–good until I put some plastic over the top to batch it overnight. Apparently SOB there were stray dots of dye that didn’t get washed off properly last dyeing session. SOB. 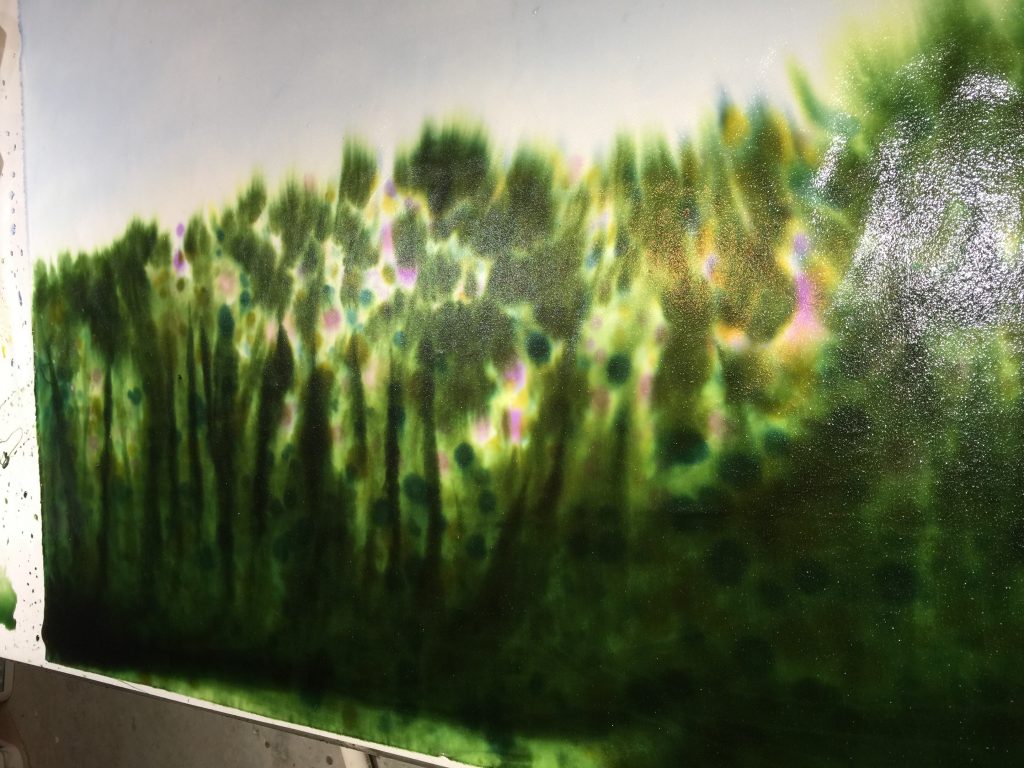 This is what it looked like about six hours later. I like the way the dye is seeping up into the sky. This is when I covered it. SOB.  And most of those dots got covered up. 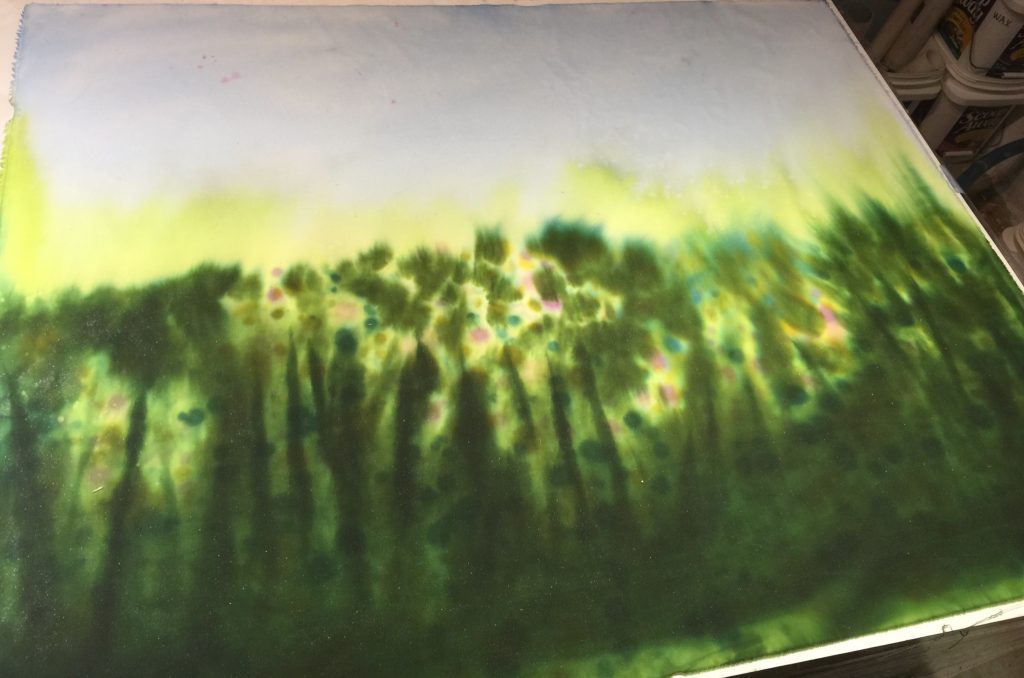 This morning when uncovered. SOB. Random specks of pink in the sky. SOB. Will have to see after washout what remains.  Cover it up with tall lupines perhaps.  SOB. 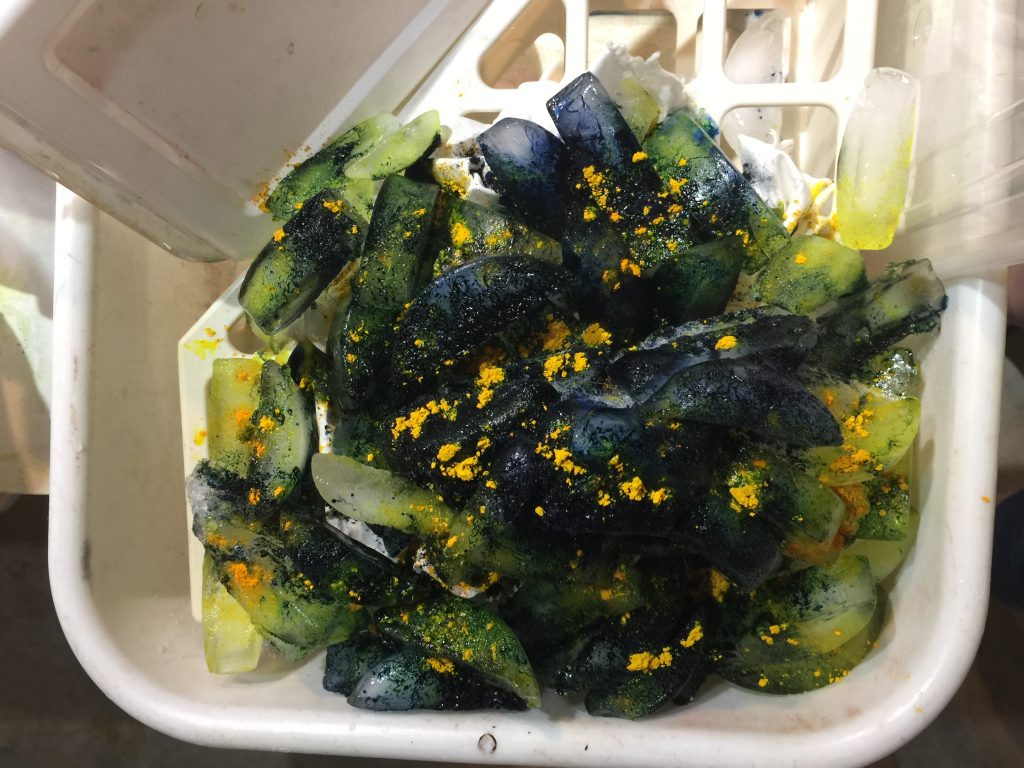 I also decided to try ice dyeing for the first time, inspired by my friend Jim Vander Noot. I used a magazine holder because it was available to keep the fabric up out of the pooling, dripping dye (instead of a screen). Put another piece of cloth in the bottom of the tub to soak up the drips. I use pure dyes, not mixes which is more typical for ice dyeing, so I kinda winged it on this one. I sprinkled the dyes in the picture below on, then dribbled some yellow dye solution I had already mixed up as well. 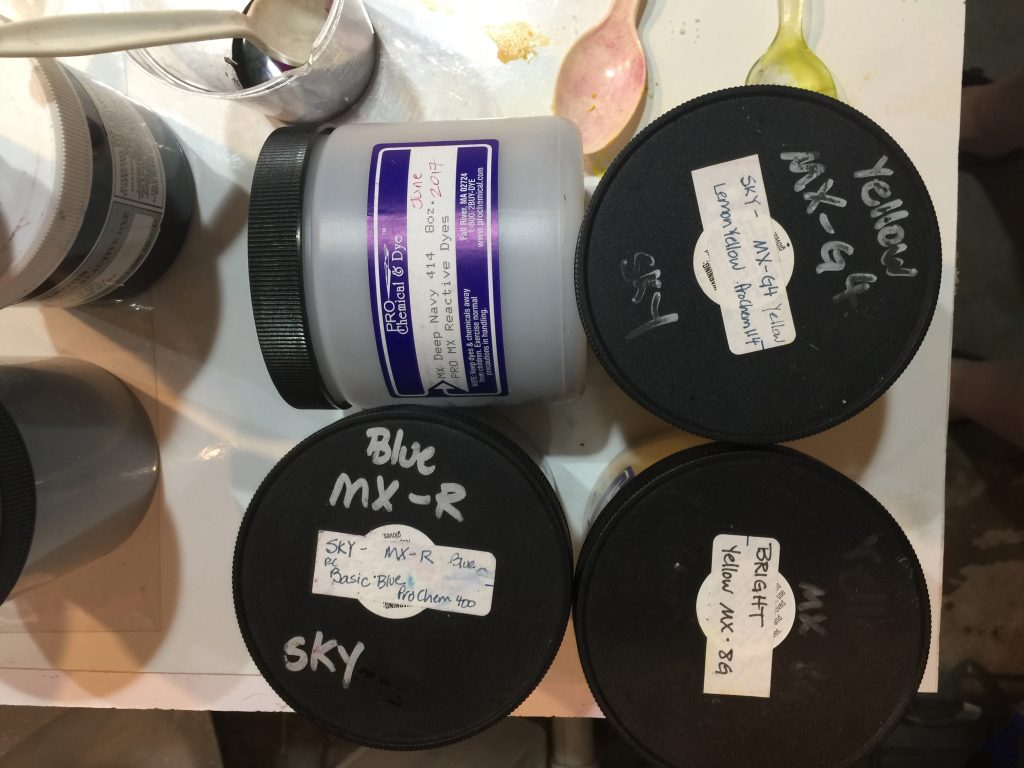 Today I washed out….stuff in the washer now.  OH MY I am SOOOOOOO gonna do more ice dyeing…totally hooked!   Hope they look as spectacular washed and dried as they did rinsed out!

Stay tuned for an update.

And…gratuitous cat pic of the new kitten, Zabu (named after the Leapin’ lemur on Zoboomafu which the boys watched when they were little) 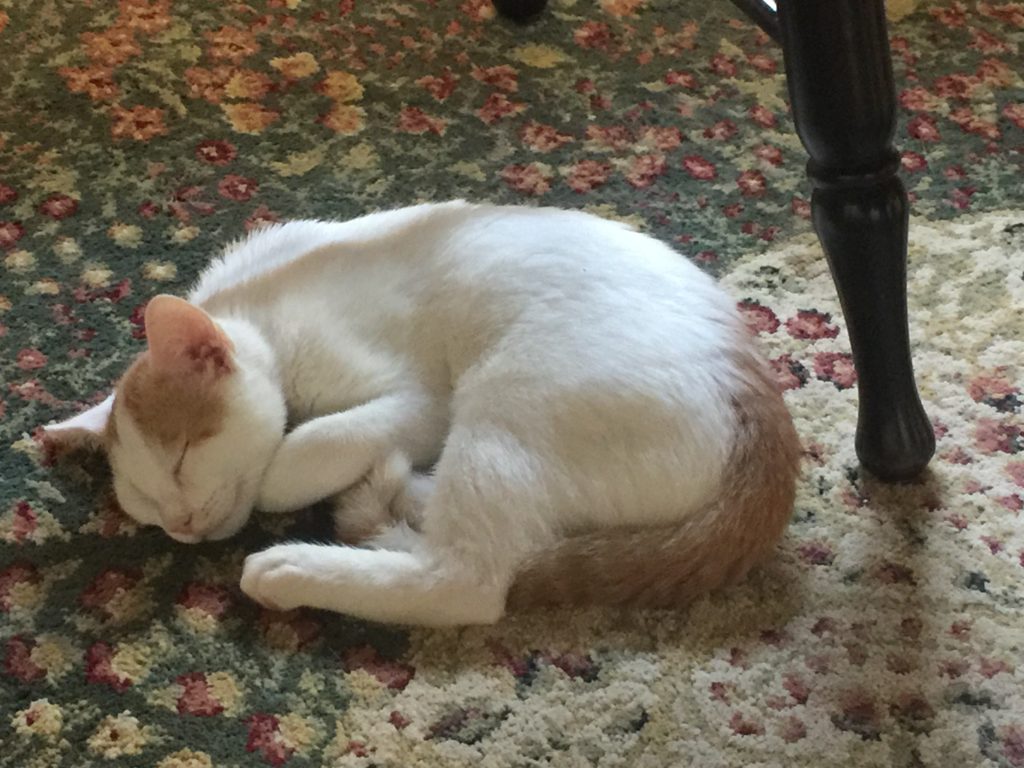 Sweetness, to be followed when awake by zooming and cavorting and wreaking kitty havoc.

This entry was posted on Sunday, July 1st, 2018 at 6:15 pm and is filed under Art, art quilting, Dyeing, Exhibiting, Fusing, Machine Quilting, Maine, Mistyfuse, SAQA, Studio pics, Surface Design, Techniques. You can follow any responses to this entry through the RSS 2.0 feed. Both comments and pings are currently closed.

One Response to “Getting ready for the next quilt….the herald of summer in Maine”