Just a short post today to share the second round of postcards I made for a recent swap.  The theme for this one was Windows!  I had made a postcard a couple of years ago with a swinging door… a second bit of Peltex (the stiffener that I use inside the postcard instead of batting..the stiffer middle makes it FAR easier to quilt on the machine) that was sewn to the top with yarn as strap hinges.  So I decided that for my windows, I would make shutters that move! 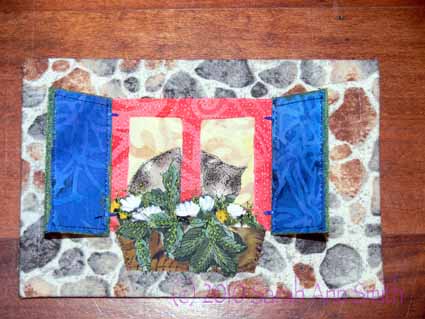 I found the stone print fabric in my stash, so thought I’d make English (or Irish or Scottish) stone country cottages with windowboxes and shutters.  Then of course every good cottage needs a cat (or several!).  I had a print fabric with kitties in green leaves, so I fused up a chunk, then fussy cut the kitties and some of the leaves.  In my stash of fused fabrics, I had some leftovers from previous projects, and used the prints to cut up more leaves and flowers for the window boxes and for the “wood” of the boxes themselves.  The coral windowframes are the same fabric I used to make the guitar in the portrait I did of my son, here.

I used a VERY wide zigzag set to almost zero stitch length to make the “hinges” where one end of the stitch just caught the edge of the shutter.  This left enough wiggle room to swing the shutters open and closed. Here is one with closed shutters: 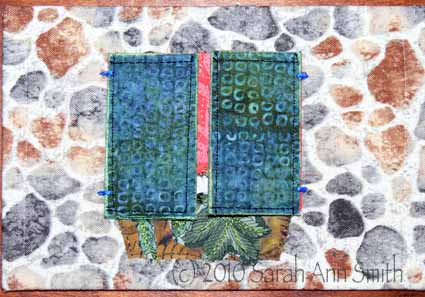 Because of the shutters, I mailed the postcards in those plastic slipcovers that you seen on fancy cards at the stationery store.  Enjoy!

A shot of the batch, with a post-it note to tell the recipient to open the shutters: 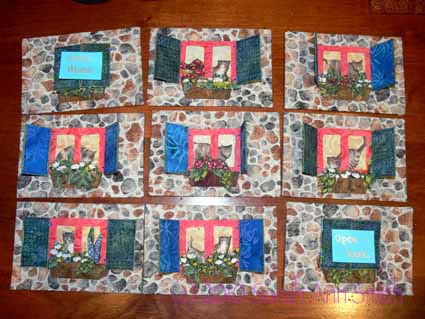 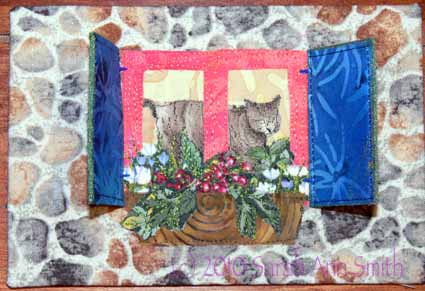 For this round, I wrapped the stone fabric around to the back to finish the edges of the card and used printed cardstock on the back side.  The shutters are edge-finished with a metallic paint and a bit of stitching around the edge to secure the fabric (I never trust any fusible to hold forever!).

This entry was posted on Tuesday, December 7th, 2010 at 5:42 am and is filed under art quilting, Fabric Postcards. You can follow any responses to this entry through the RSS 2.0 feed. Both comments and pings are currently closed.