Conversations, Part 1–the idea, the photos and starting work

When my fellow Frayed Edges and I started talking about the “Letters” challenge (see the posts in July about our Frayed Edges show at the Camden Public Library), I was working on my online lino-cutting class with Dijanne Cevaal (posts here and here and here and here).  I wanted to use writing on the fabric similar to how Deborah does, and also to perhaps make some linoleum blocks or screen prints to print onto the fabric. As I thought about the title for my pieces, I thought about the conversations that happen at the lunch tables at the Getty Museum… 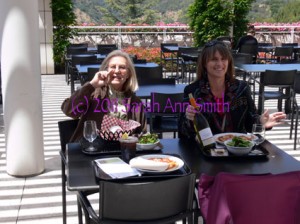 Lunch was lovely! (and I have NO idea why the watermark is now smack in the middle of the photo!)

Here are my three pieces (click to see larger): 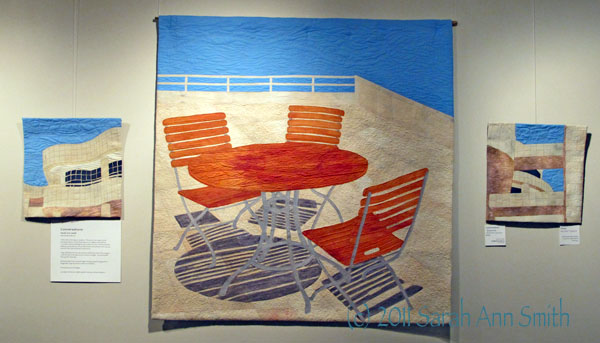 I based the center piece on two photos: 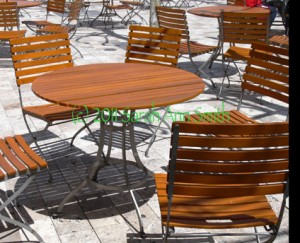 This was the main photo; I used the two chairs on the far side of the table, but didn't like the position of the chair close to me 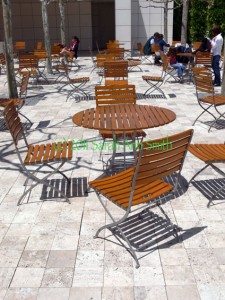 The chair in the foreground became the one on the near side of the table, but I had to account for the change in the location of the sun

And the smaller pieces were based on photographs I took of the buildings.

It is the contrast in straight and curved line, stark stone against the brilliant blue sky, and the shadows cast by the lines of the architecture and the lines of the bistro tables and chairs in the patio that sang to me.  At first I was going to make the center piece based on one of the buildings.  Then I realized I’d really to have a least a snowball’s chance in a very hot place of selling my work, and the chances of selling a quilt of the Getty Museum (located in Los Angeles) while based in Maine was pretty much less than zero.  So I switched gears and focused on those wonderful tables and lines and shadows.

With all the tumult in my life, the lino-cutting and screen printing, which I thought I would use to texture the cream colored cloth for the stone used to face the buildings and pave the courtyard,  just didn’t happen…I ran out of time and just didn’t get to explore the use of letters in the way I had hoped.   But I did write on the quilt to create the shadows on the table and chairs where there are vertical surfaces on the slats.  It is *really* subtle now that it is quilted…I’ll confess even I have a hard time reading the words! But I promise…the words ARE there (maybe it’s the way conversations fade and vanish into dim memory?).

Before I got to the writing, however, I had to make the cloth. 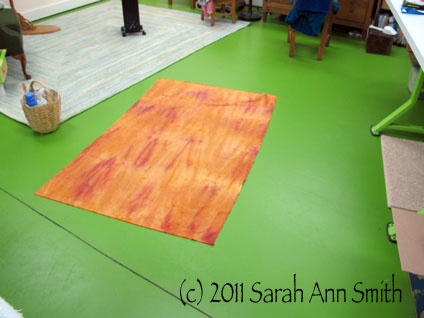 The fabric dyed for the tables and chairs, on my green-painted studio floor

Then I had to mess around with the cloth.  I couldnt decide how to make the shadows.  I tried darkening the light stone cloth.  I tried lightening the dark gray cloth.  I used various methods.  I didn’t like them!  It looked like paint on the paving stones–not shadows.  Somehow I needed more transparency, and any sheer fabrics in my stash were to shiny/cheezy-prom-dress stuff.  So I decided to try doing the shadows with thread at the quilting stage.  Hmmm. 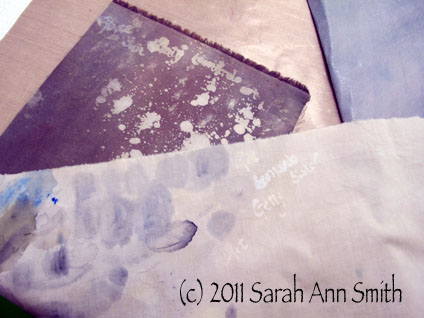 I tried paint, pencil, ink, assorted other painats, bleaches and discharge agens. Nothing quite worked for the picture in my head. Hmmm....

Then there were the table legs…here, the freezer paper patterns for all the table and chair components that were metal. 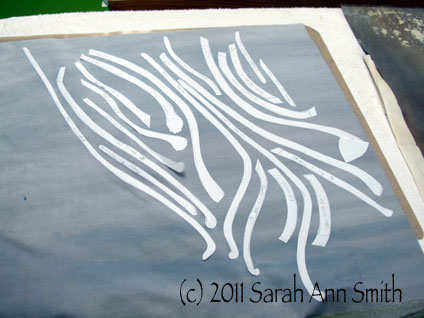 No, not white spaghetti, but to-be table and chair legs

Then the construction process began.  I decided to try something new.  Having tried it, I can tell you I will NOT do this again!   Usually when I create a fused top, it is an independent thing… I fuse the top on my non-stick sheet, moving around as needed.  This time, I decided to try fusing things to a base, in this case a large piece of embroidery stabilizer.  This stabilizer is (when used under embroidery or applique) water-soluble and turns into little bits of polyester fiber, which helps add loft to the applique or become a bit more batting.  What I didn’t think was that by fusing the fabric to it, I would make it impossible for the stuff to “dissolve”.  Erk.  Not so great.

Here’s the top in progress: 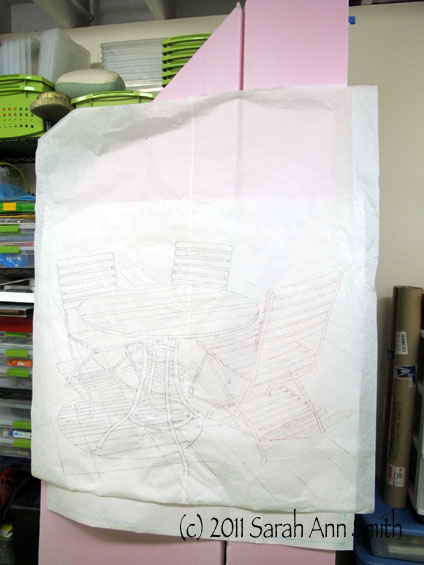 The initial "sketch;" I used my digital projector to project the photos onto the paper, then outlined and created the composition from a couple photos. 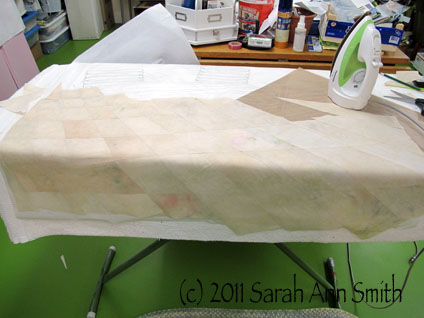 The fusing begins. I cut freezer paper patterns for the paving stones, then cut from various light and dark areas of the hand-dyed cloth to get the varied appearance of the terrace. 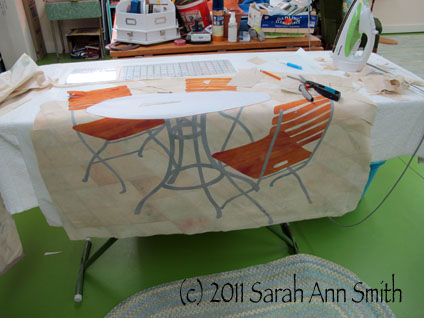 Placing the chairs and table top. 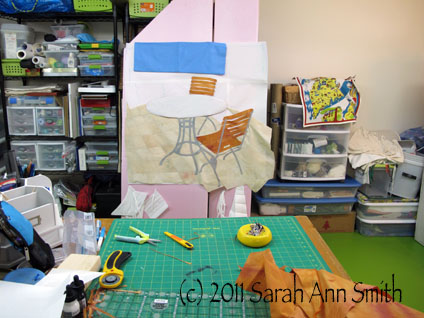 Checking out the sky fabric. This railing and table scene doesn't really exist... but I so wanted the contrast of stone and sky, and most of the tables are in a courtyard area. So I made up a terrace that has a railing and sky in the distance!

Next, I had to figure out what my made-up railing and side wall would look like.  Straight across was too boring, so I added the angled wall. 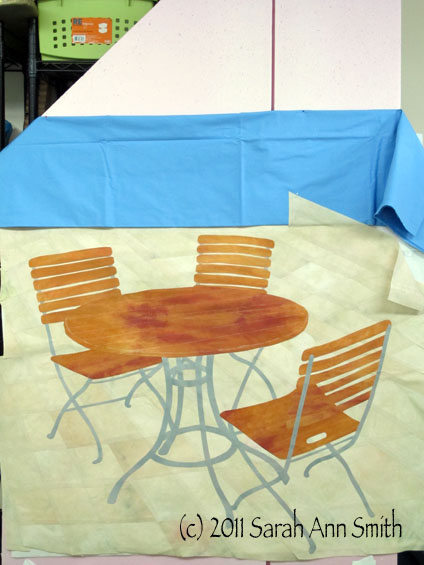 Finally, the top is done: 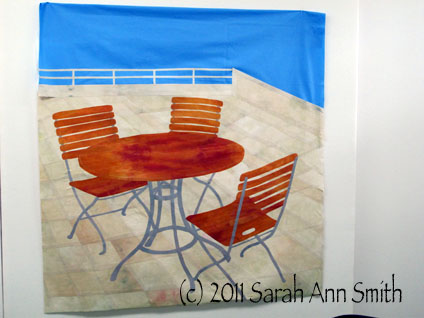 The top, done, before it started looking like a brown paper bag, wrinkled!

Next post I’ll talk about the quilting, at least the first part of it.

This entry was posted on Saturday, August 6th, 2011 at 8:13 pm and is filed under Art, art quilting, Travels. You can follow any responses to this entry through the RSS 2.0 feed. Both comments and pings are currently closed.

3 Responses to “Conversations, Part 1–the idea, the photos and starting work”