Two and a half weeks ago, I came across a Jimmy Fallon re-working of Bob Dylan’s The Times They Are a-Changin’ on Facebook and Youtube (hear it here–really LISTEN to the lyrics).  I was so moved by it that I wanted to create a quilt based on the song, but realized there were all those pesky copyright issues with using Fallon’s lyrics, so instead I created this quick piece to capture the spirit of the re-worked song. I pretty much never just drop everything and make a quilt this rapidly, but I just had to do it. I have titled it Words –> Power –> Action because, as our mothers told us, words have power.  Over the past two years, the election cycle, the results, and the first year of the current Presidency, have galvanized many so many of us. I have changed.  Legions of us have changed. 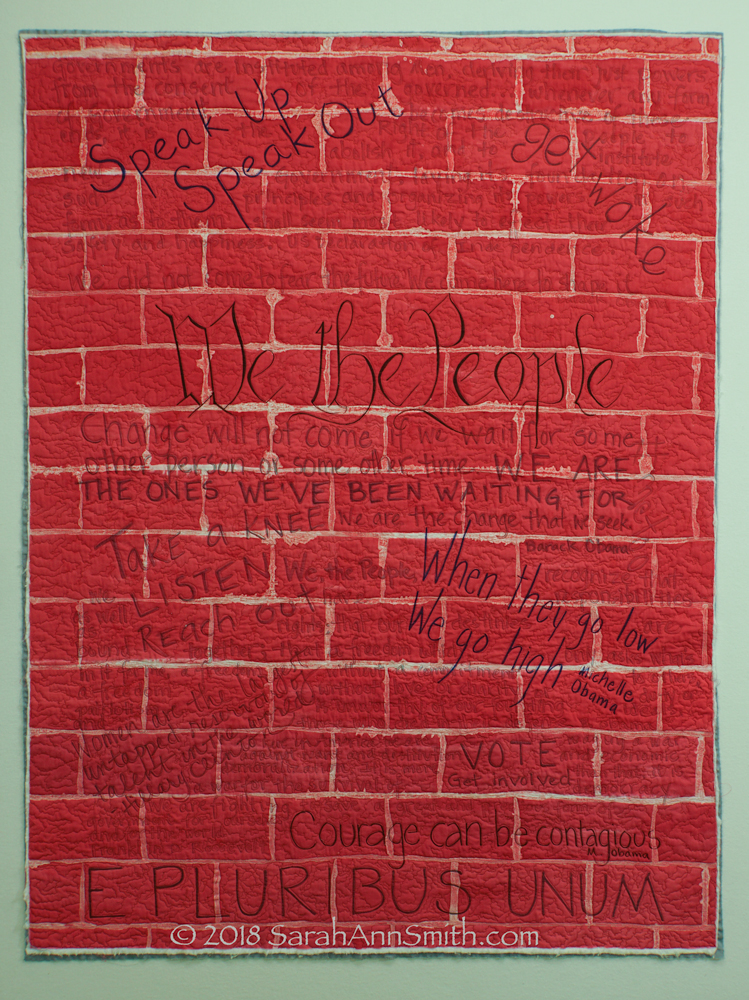 As a US Foreign Service Officer, I was not allowed to participate in partisan politics (federal regulations) because our job was (and should be) to serve ALL Americans.  I was used to keeping my mouth shut.  As a national level quilting teacher and artist, I felt it was better to keep politics and religion out of the classroom (and still do), so I kept my mouth shut.  But the past 20+ months have convinced me that I must speak out.  My quilt about the Women’s March on Washington in January 2017 was my first overtly political quilt. 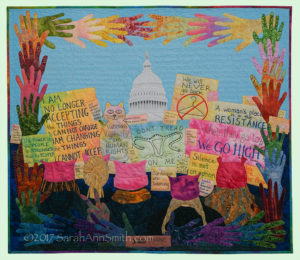 I’ve been so distressed about the polarization and apparent lack of civility, compassion and understanding, of tolerance for differing views, that the past two years have been pretty depressing.  Our political climate has made me angry and galvanized me to take action and speak out.  Inspired by Fallon’s lyrics I went in search of quotes.  I’ll share all of them after each detail photo in which they appear.

I began like our nation, with revolutionary words from the US Declaration of Independence, which are written at the top of my brick wall (yes, I have the Pink Floyd lyrics “another brick in the wall” running on loop in my head, along with the phrase “the writing is on the wall”–I resisted the temptation to use that as a title!).  I dyed fabric to be a wall, using cold wax (from ProChem, and can’t find it any more on their website!) to create a resist for the mortar.  The backing is dyed cement grey.  The edges are raw, like my nerves and emotions (and those of so many others), torn on both the top and backing, with a tiny bit of batting peeking out and scruffed up. 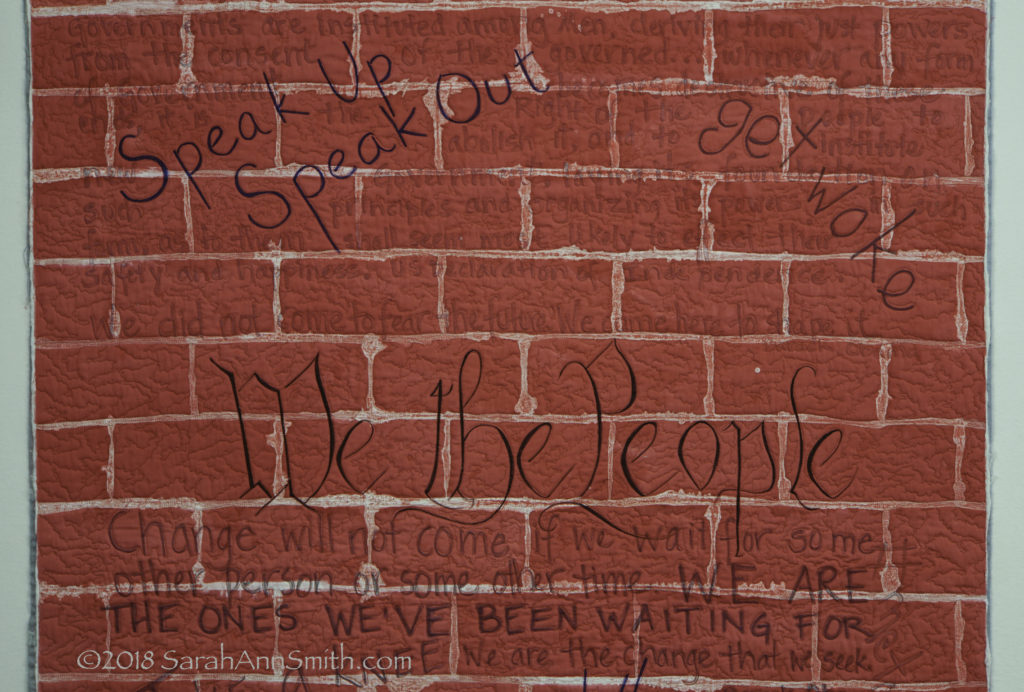 The top portion of Words–>Power–>Action . There are more visible bits of words and phrases, and longer quotes written in lighter ink behind, as if they were fading graffiti. 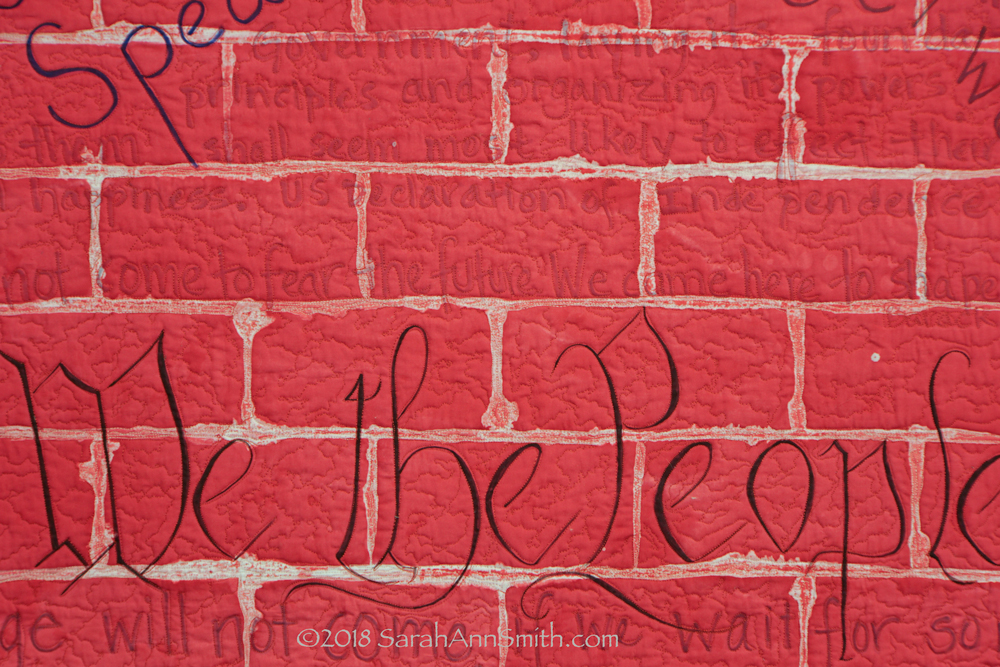 Closer view of the center of Words–>Power–>Action with quilting that I hope simulates the rough texture of brick. 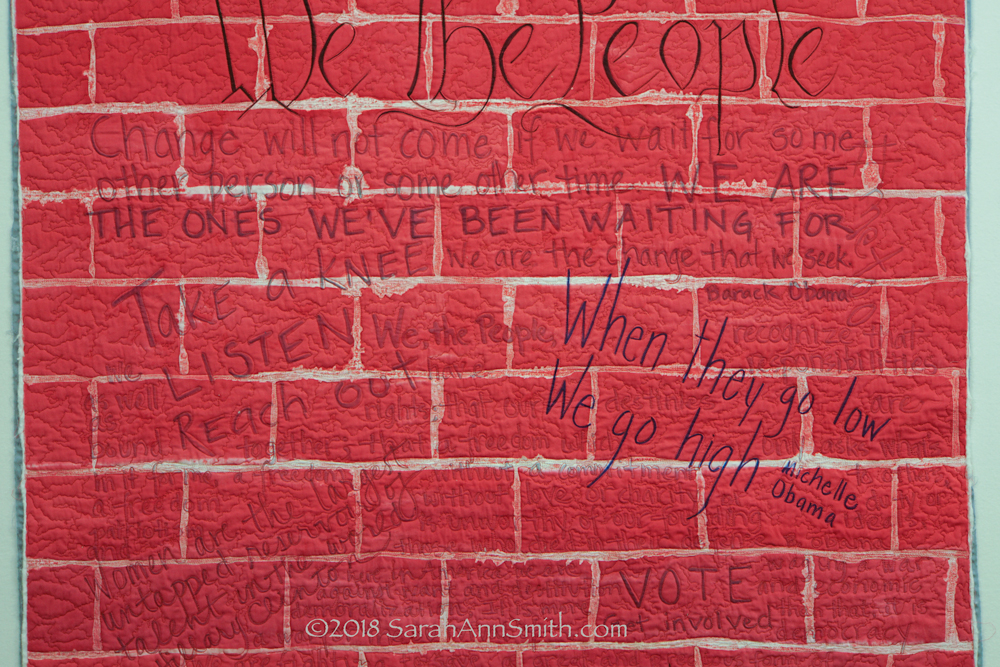 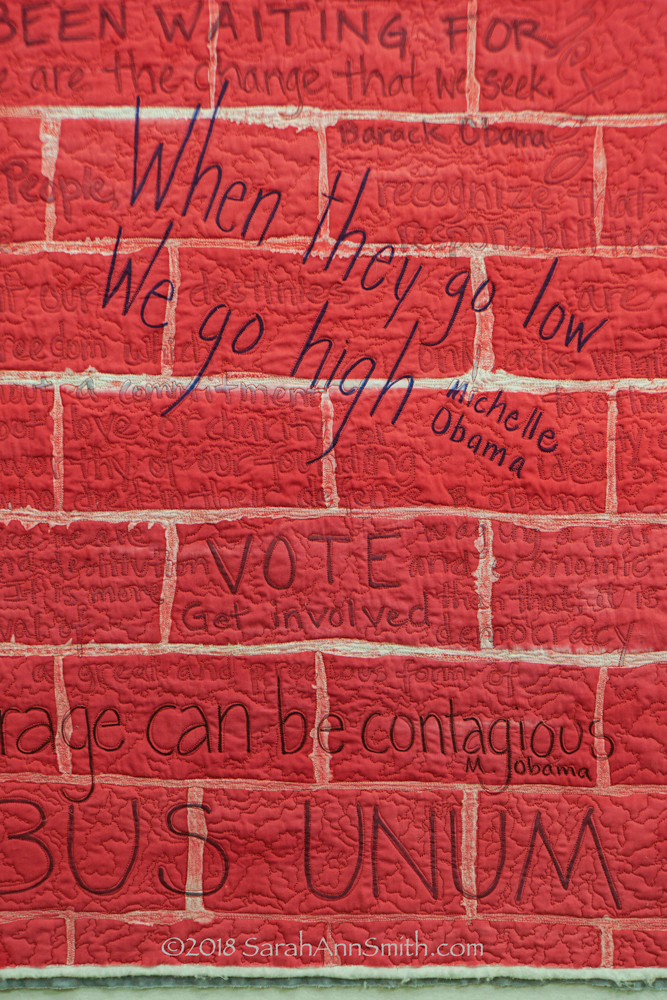 Thanks for reading this far.  I hope you like it.

This entry was posted on Thursday, February 22nd, 2018 at 1:39 pm and is filed under art quilting, Dyeing, Inspiration, Machine Quilting, Surface Design. You can follow any responses to this entry through the RSS 2.0 feed. Both comments and pings are currently closed.