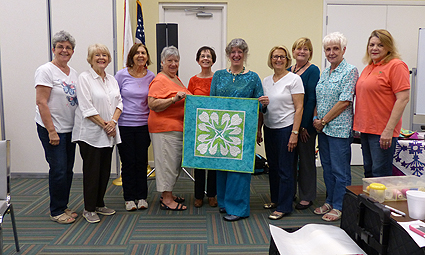 With the ladies of the Gold Coast Quilters of Boca Raton. I was so busy I think this was the only photo I got that day!  Because my Nourish quilt and the machine appliqued Haleakala Sunrise are touring with the 500 Traditional Quilts exhibit put on by Quilts Inc (the wonderful folks that bring you International Quilt Festival in Houston and other  locales), I made two new, pillow size Taro blocks.  This one will fit a 26″ Euro Square pillow.

So there’s a reason why I haven’t been blogging much–I’ve been too busy!   First I had another kerfuffle with the person who made the apparently derivative copies of my A Sense of Place art quilts (blogpost a couple of posts below this one in early March).  She sicked an attorney on ME (!!!) for saying that she appeared to have clearly copied my work!  She made all sorts of demands, only one of which I agreed to:  I removed the letter she wrote to me from my original post.  I had to spend two full days, right before the trip to Florida, dealing with this nonsense because they wanted a reply within  8 days–days when I would be away teaching!   Sheesh!  Anyway,  I refused all requests other than the one above, such as I refused to retract my assertions that her works were derivative, refused to request the removal of the discussion of copyright from both of the closed art quilt groups on which I mentioned it (without EVER mentioning her by name or identifying her site!), refused to retract my requests to Etsy and Pinterest to remove her apparently derivative works.   I wrote the attorney a LONG letter, starting with images of my works, a photocopy of a widely distributed book in which one was published (500 Art Quilts), and basically said “can you see what the problem is?  Can this end now?”  So…no reply to date from either of them so hopefully she will go away and learn  her lesson.  And I can get on with FUN STUFF!  Like Florida.

The trip began with a flight delay leaving Maine (after getting to the airport at 5:20 am):  the previous day there had been yet another snowstorm that messed up travel up and down the  Eastern seaboard.  There was no problem, however, because I had a four HOUR layover in Boston which, thanks to delays on United, turned into a six hour layover.  Luckily, I was easily re-booked onto a later connecting flight and only got in about 90 minutes late, and didn’t have to teach or lecture until the following evening.  AND my luggage showed up! 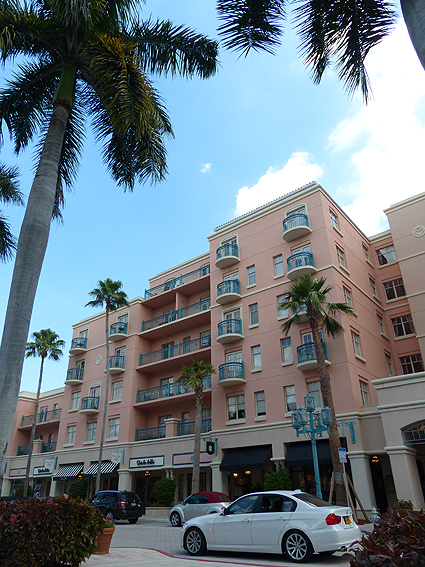 I had down time the first day–we had me come down a day early just in case, as it turns out we needed, there were weather delays. That meant I had several hours on Tuesday to tootle around Boca Raton. So I went to an area called Mizner Park after my gracious hostess gave me a quick driving tour of downtown Boca.  Thank you Marlys and Chris for taking me around!

This was one of the most bizarre things I’ve seen…yes, that is a ROLLS ROYCE Pick-up truck.  One has to ask WHY?  The guy wandering buy seems as confused as I was! 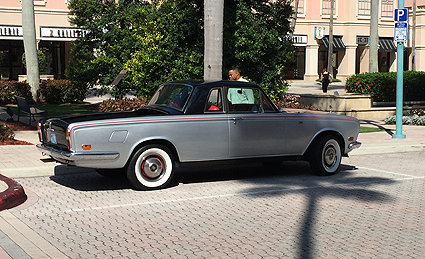 So I saw this pick-up truck and figured I’d never seen anything like it. It looked to be a Rolls, but do they make pick-ups? 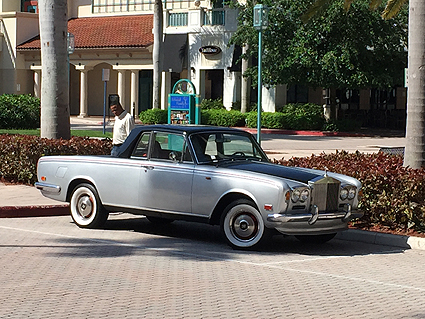 Here’s a shot of the front–yes, that’s the winged lady on the front with the RR. One has to ask WHY? I googled, and no, they don’t really make them, but people “convert” them. WHY? 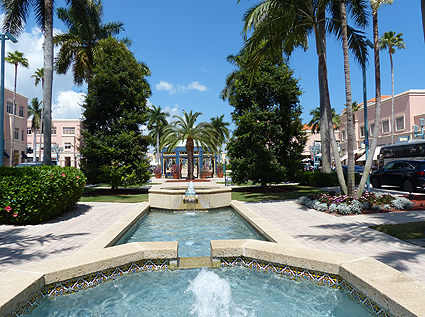 After months and months (literally) of single digit and below zero air temps and colder wind chill, it was lovely to sit in the air in shirtsleeves!

I’m also taking an online photography course with Ricky Tims, so I was on the lookout for “texture” photos, and loved these palm fronds: 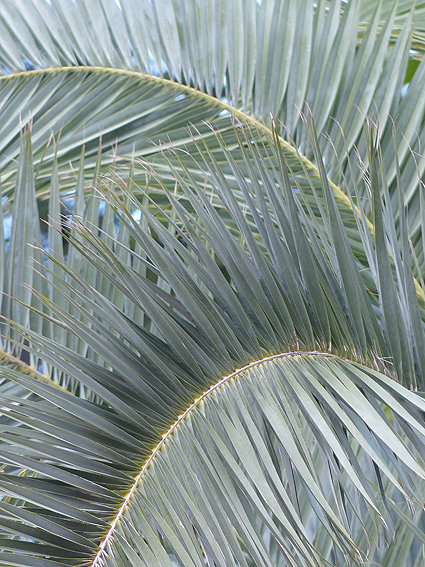 No idea why the (C) didn’t show on this image, but it’s mine!

The first day I had a light supper with the guild board at QuiltStitches in Boca Raton (FB link here) owned by Johanna Felderbaum.  It’s a great shop–stop in if you are in the area!  She has a great range of fabrics.  Waving hullo!   That evening I gave my “How did she do that?” lecture, followed by Hawaiian Applique the next day.  Then on Thursday, I flew from there (well, Fort Lauderdale airport) to Orlando where I was booked with the Ladies of the Lakes Guild in Lakeland, near Orlando.   More on that in a few days!

This entry was posted on Sunday, April 12th, 2015 at 7:07 am and is filed under Applique, Fun stuff, Hawaiian quilting, Machine applique, Teaching / Classes. You can follow any responses to this entry through the RSS 2.0 feed. Both comments and pings are currently closed.