It snowed. A lot!

So what does one do when you are moving in and it snows?  Stay put and unpack more….   I got my wish for at least one really good snowstorm after moving in.  Last night we got (I’m guessing) somewhere around ten or more inches of snow between yesterday afternoon and sometime in the wee hours. 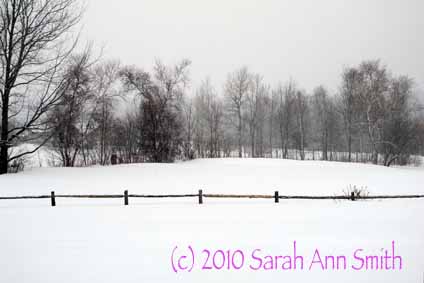 Mid-morning Friday it began to snow. Notice the top rail of the fence and the top of the fence posts. You'll see why I'm asking at the end of this post!

The photo above was yesterday afternoon…HOW did I get so lucky to live somewhere so beautiful??? No matter what the weather or the season, it is glorious!  I can wait to see this view turn green, then gold, then back to white, as the year turns and share the view with you all.  And I may be more than just a bit of an odd duck:  I have always loved storms:  rain, wind, whatever.  This house is very snug and tight, which is a good thing as it takes quite a buffeting from the wind. 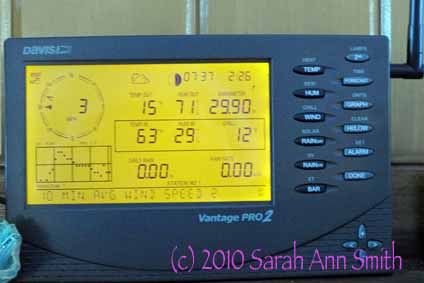 It has been colder, but not by a whole lot.

When I got up this morning…it was a bit brisk. Yes, that is 15 Fahrenheit,  with a mild breeze blowing (3 miles an hour, bringing it down to a wind chill of 12). 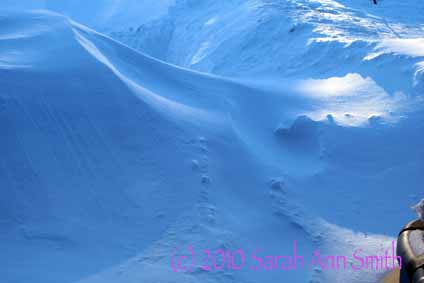 Mt. Everest you might wonder? Snow capped peaks? Sort of....

Once I got the storm door unfrozen and used it to push away the snow blocking it on the outside (I was thinking it was a good thing the house wasn’t on fire!), this was the view of the path to the car.  Ahem.  Path?  What path?  FORMER path.   Now, it didn’t snow that much…the wind blew it there….. 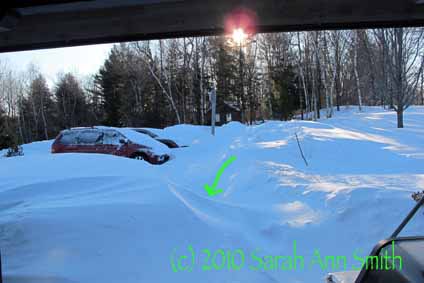 The arrow points to the close-up shot shown above

If we wanted to go anywhere, or let in the guy to measure Eli’s room for carpet, or take the dog for walkies, that path had to re-emerge.  I used the exercise as an excuse for waffles (with maple AND raspberry syrup thank you very much, and my made from scratch recipe please, no toaster waffles!) later.  Ahem. 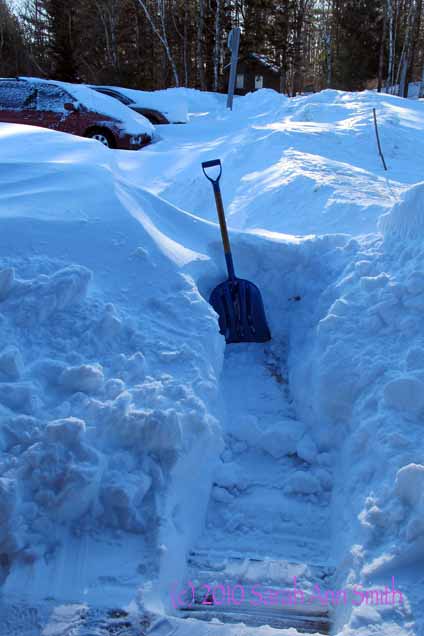 There's that snowcapped ridge again, with the shovel for scale

Fortunately, the snow wasn’t too heavy!  Eli, who is getting *very* tall (at almost 13 he is just a skosh shorter than I am!), did the doggie duties. 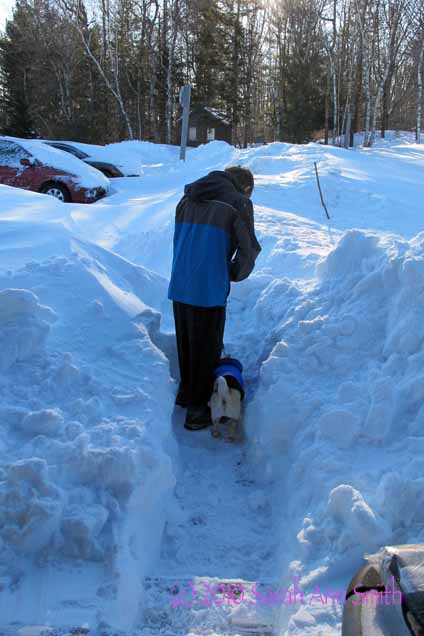 But but but, said ‘Widgeon, my leggies are short! 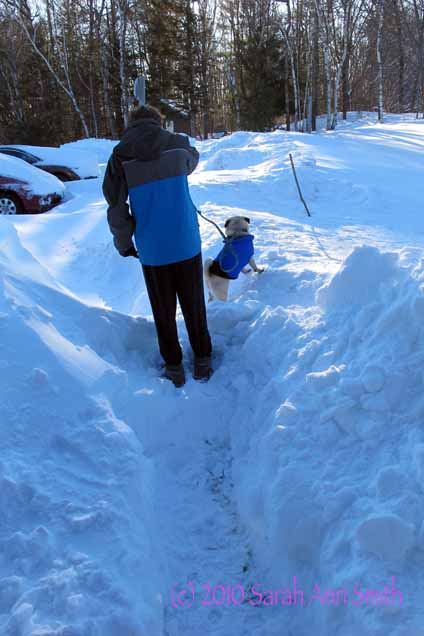 Hah HAH! The doggie is a trooper! He's reached the pinnacle!

And it is SO much fun to romp in and eat the snow: 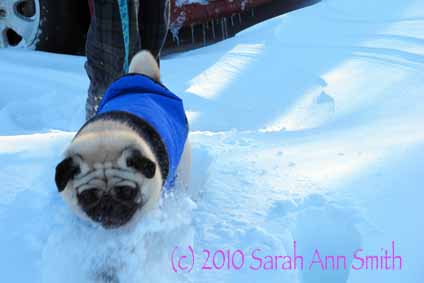 Then it was time to dig out the car (yes, we are eventually going to build a garage!) 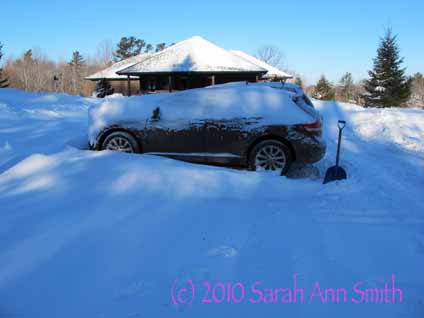 Please notice the car. Behind the wind blew the snow nearly away (tho the plow ridges on the side of the drive are nearly as high as the side mirrors). 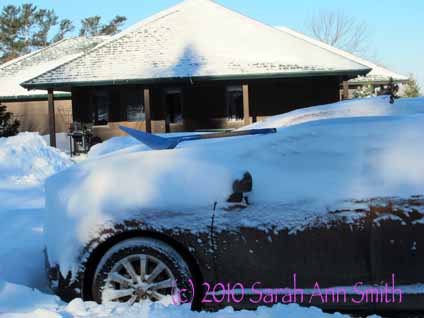 It appears the snow decided to land on the hood of the car. As you can see from the shovel I placed on top, the roofline is snow-extended all the way to the bumper!

Phew!  It wasn’t as much work as I feared, though, because the wind swirling around the cars had minimized the build-up between them and on the sides. 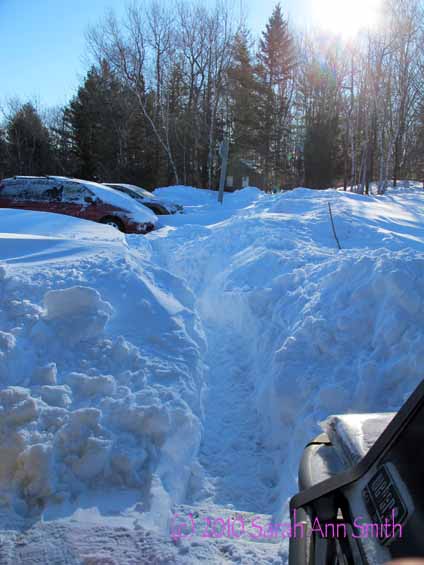 DONE! There is, once again, a path. And if the weathermen are right, we'll have three consecutive days above 36 which will melt and mud things up nicely....time to get the dog-wiping rags out!

And remember those fence posts…. 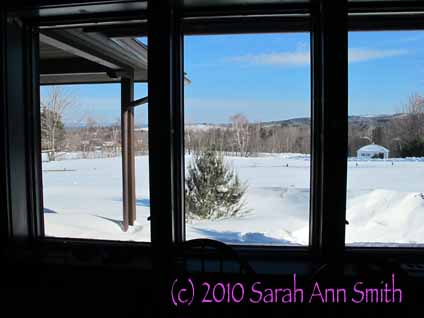 This is the view from the dining room. If you look in the middle distance, you might see some little brown dots.

Here’s a closer view.  The top rail of the fence is now buried, just leaving the tips of the posts.  Wonder what the ground looks like under the snow?  We’ve never seen it except in the real estate listing photos! 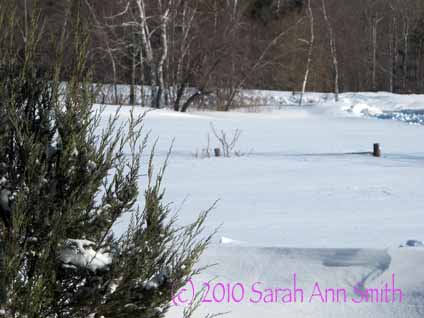 Yes...those little dots in the middle are the tippy-tops of the fence posts. I LOVE IT HERE!

Now…to unpack and hang some pictures…nearly done (well, except for the studio…another week or so until I can begin there due to painting gonna happen).

This entry was posted on Saturday, February 26th, 2011 at 6:49 pm and is filed under Inspiration, Maine. You can follow any responses to this entry through the RSS 2.0 feed. Both comments and pings are currently closed.