For the third year, I’ve been lucky to be invited to submit a quilt for consideration for a special exhibit to debut at the International Quilt Festival in Long Beach (and which has moved on to Houston and beyond for the past two years).  My earlier entries were the portrait of our son, Joshua, for the “Beneath the Surface” challenge and a self-portrait for “The Space Between.”  Curated by Leslie Tucker Jenison and Jamie Fingal of Dinner@8Artists, this year’s theme is “Rituals,” but the size has changed to a more challenging 24″ wide by 60″ long. 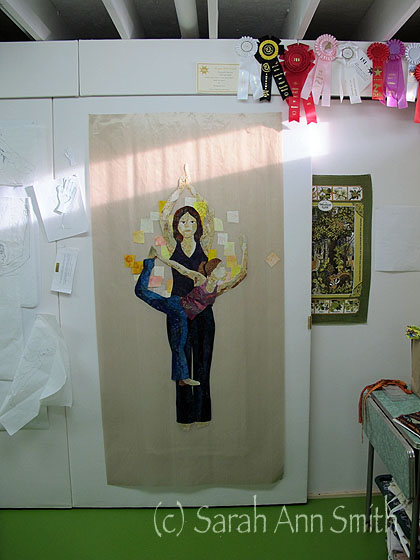 Fairly early in the fusing process for Strength and Calm

My first thought was to do a triptych of sorts:  breakfast is tea at my laptop with oatmeal (Irish oats), lunch is dog walkies, evening is decaf tea and a good book.  But I was bored with it before I even began.  And I was stumped.  I don’t feel like I really have any other rituals.  I’m sure I do, but what?  And could I make ANYthing of interest to ANYone?

While mulling over my lack of ideas, I signed up for a class at the local Y called Bodyforging.  This class combines some yoga positions, Pilates and other exercises to develop core strength, flexibility, and I’m sure there is something else.   One day while working on a “mermaid” pose, I was watching a classmate thinking how beautiful the shapes of her body are while doing these stretches and the idea for a “yoga” quilt was born.  At first the idea was just to do a figure, perhaps with some ghosting of the movements through the sequence.  But then I realized I could use this theme for Rituals, as this class has become an essential ritual in my week.  After a nearly 20 month hiaitus in exercise thanks to too much life happening, it was time to get serious and do something about my increasingly weak and flabby body.

Good news:  the body is getting stronger, flexibility has returned, I love the class, AND I morphed the idea for a “yoga” quilt into this project.

To fill the long space, I decided to use a woman in “Mountain” pose: standing straight with arms above her head, but with a closed fist and an open hand, since our teacher closes each class with the thought of the fist for strength, the open hand for calm, as we go into our days.

But a single figure like that would be boring, so I thought about layering figures and poses.  I loved “Mermaid” and “Warrior” so knew I would use those.  I needed another vertical image, so in googling yoga poses, chose the figure with the lifted leg.  Checks with a few friends indicated they didn’t like the pose with the arm extended in front (and therefore cut off from visibility on the quilt), so I moved her arm up for balance which is a challenging variation on the pose.  And I love what is known to me as the pretzel stretch.

I began by assembling various generic photos to use to create my sketches; when done, I outline using a fine black felt-tip pen.  The paper used below is medical exam table paper which is cheap, fairly thin and can be cut long—a lot more thrifty than tracing paper.: 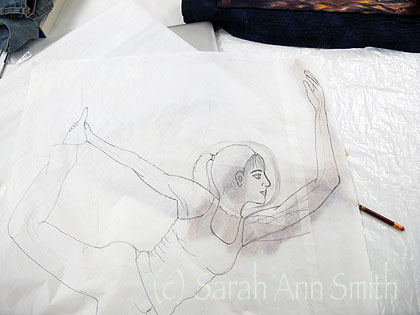 Full-size pencil sketch of one of the two main figures--I later realized that the arm in front is disproportionately long and fixed that.

Then I decided to begin with the two main figures in cloth, starting with the hardest parts:  the faces and exposed body parts.  I picked a bunch of pre-fused (I love Love LOVE MistyFuse!) skin tone fabrics: 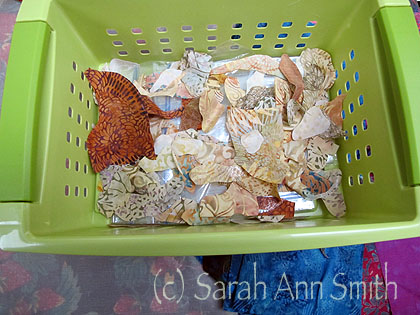 Skin tone fabrics--with skin tone being very loosely defined, since some of these include lavender and green and burgundy--cut into collage-able chunks.

I started with the face: 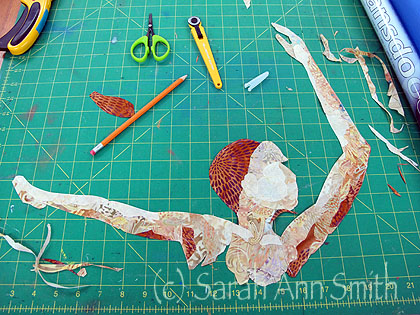 Blocking out the shapes. I cut to approximately the shape I need, then fine tune after "fuse-tacking" in place. Here I've moved the in-progress piece to the green mat to improve contrast for a photo 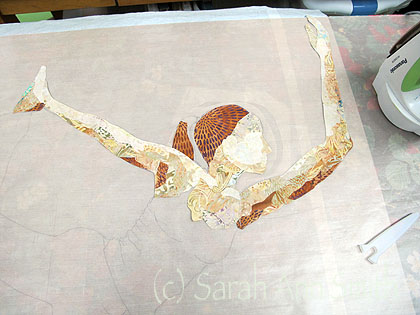 A bit more fabric added, blending done. You can see underneath the nonstick press sheet the ink outlines on my inked sketch. I position the fabrics on top and fuse them to each other. If you look at the very first photo, you'll see the head and arms UNDER the sketch. I will position them under the inked outline and add transfer paper to transfer the final edge and trim. 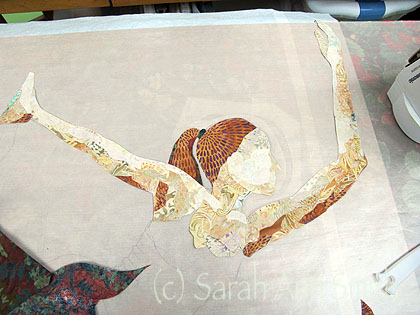 Refined a bit more; the fabrics on the left are ones used to cut slivers for more hair

The garments go together a lot more quickly, and use much larger segments of fabric: 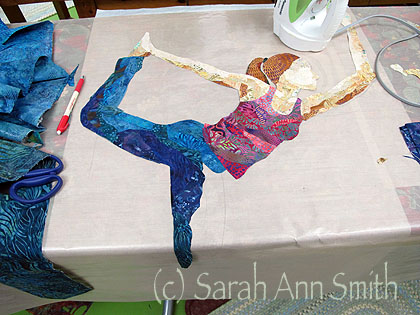 shirt made, pants in progress

Then there is the lady in the Mountain pose: 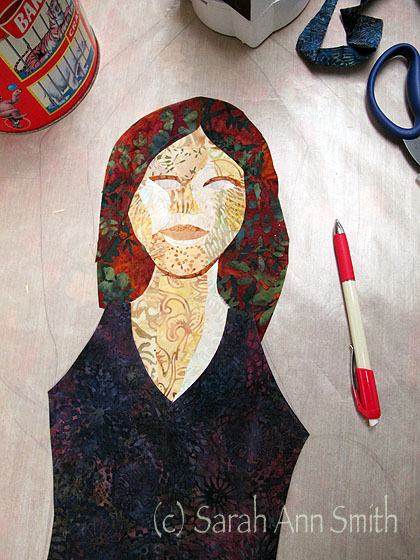 Working on the face...looks kinda creepy with the eyes not yet inserted under the openings. 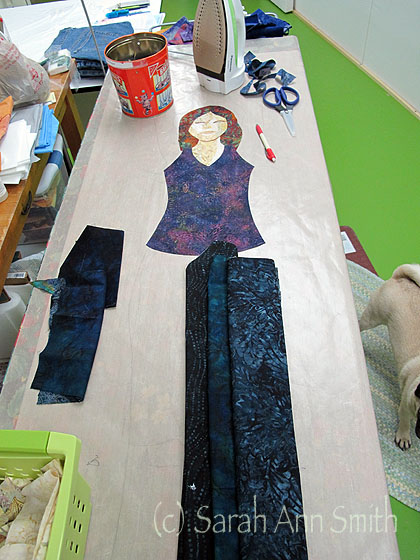 Checking fabrics for her pants. I wanted the garments for this figure to be darker and more toned in color than the woman in the foreground.

I didn’t want to use an exact replica of the photo I found on the internet, so I kinda made up this figure and her face.  I can tell.  For the hands, I used the camera on my laptop to take pictures of my hands in the position I wanted.  I struggled with the face getting the eyes and pupils and whatnot “just right.”  Now that it is done, it isn’t perfect, but it is improved one tiny sliver and trim at a time.

Here are the two mostly-completed figures pinned up on the wall:

Mostly done and on the wall to review: there isn't enough contrast between the standing leg of the woman in front and the woman behind, so I revised the fabric on the standing leg. The accuracy of shading isn't right any more, but it works better overall.

I wanted to have the color radiate out from behind the figure with the lightest color like an aura/halo behind the standing woman, merging from yellow to coral and pink to plum.  I could have pieced it, but all those seams are lumpy and bumpy to quilt, and I wanted something fairly jiggedy-jaggedy.  So I fused it.  I prepared but using my stash of pre-fused fabrics and fusing up some larger chunks to cut into sorta-square-ish shapes. 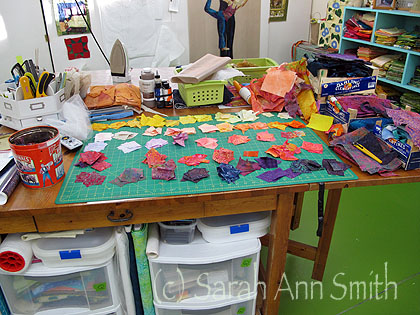 Ready to start on the background. I cut the shapes then sorted them into a color gradation.

Then I started working my way out, as seen in the photo up top, which I’m repeating here:

Fairly early in the fusing process for Strength and Calm--note the tan press sheet on the wall and see the text and link below.

For the next post, I’ll show the some photos of working out the background, then deciding what to do for the additional figures.  At this point I still didn’t know if I was going to use fabric–either collaged or silhouette or sheer, or simply quilted outlines, or what.

And a plug:  that long tan bit on the design wall is a ginormous non-stick applique press sheet.  It is pretty much the same thing which MistyFuse uses to make their nonstick Goddess press sheets, but really BIG.  I ordered it from art quilter Valerie Hearder, in Canada, here.  After several years of dithering and waiting to have some savings in the bank, I bought TWO pieces each 36″ wide by 72″ long!  One covers my big-board ironing surface, the other is pinned to the design wall.  It was totally worth the expense, and really easy to order from Canada–passing through Customs and international mail was easy peasy.  Valerie sells it in either 18 or 36 inch wide bits, and sells it by the yard so you can get just the length you need for your available space.

This entry was posted on Saturday, March 3rd, 2012 at 1:41 pm and is filed under art quilting, Challenges, Exhibiting. You can follow any responses to this entry through the RSS 2.0 feed. Both comments and pings are currently closed.

5 Responses to “Quilting at last! or….Rituals, #1: Strength and Calm”