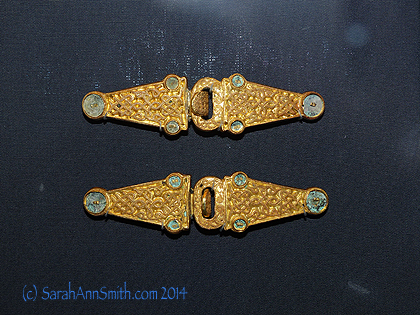 The Sutton Hoo Burial Treasures at the British Museum, London

In 1978 I spent a semester in school in London.  It was pass-fail, not grades, so I passed.  But my time and interests were elsewhere:  I went to museums and the theatre (inexpensive same-day tickets) every week.  Every weekend, well almost every one, I went somewhere in the country by train, staying at youth hostels.   It was a most amazing few months, and some of the images have stayed with me since I was 19.  Some of those images are from the British Museum‘s exhibit of the phenomenal Sutton Hoo Burial Ship treasures which date to about 724 AD.  A decade or so ago, I learned that one could now VISIT the site where the ship was dug up, and that began my quest to return to England.  Before Eli and I went to East Anglia, however, I wanted him to see what had stayed with me all these decades.  The buckles above are just two of the samples–the intricacy of these small works is simply phenomenal, the imagery enticing.

We reached the museum mid afternoon, having been up well over 30 hours (overnight flight in a too-warm airplane included), so Eli kinda hit the wall and didn’t look much.  And it was crowded.  Beyond belief crowded.  The line into the ladies room took over half an hour–Eli actually sent a text wondering what had become of me!  I wanted Eli to see the Rosetta Stone and the Elgin Marbles since he is studying Latin. 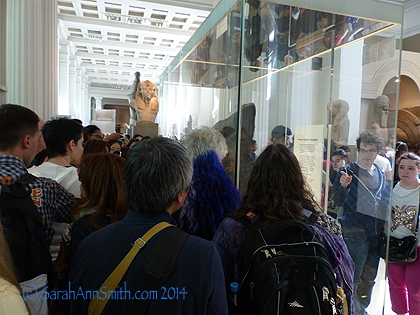 This is the horde of humanity around the case with the Rosetta Stone. UGH. Too many people!

Eventually, we got close: 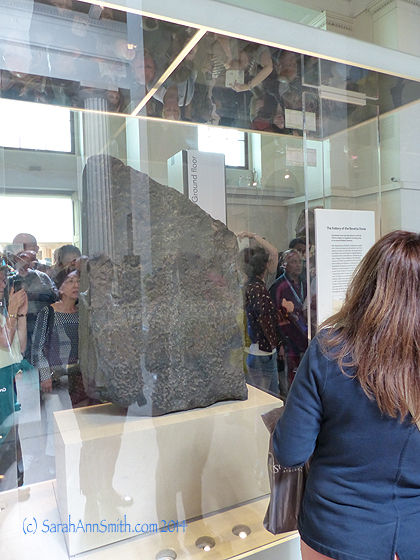 Yep, the one, the original, the stone that helped humanity learn to read Egyptian heiroglyphics.  But what crowds.  We ended up being too tired to find the Elgin Marbles that day.  By the time we returned to London, we decided that we couldn’t cope with the hairy hordes and did not return to the Museum.  I hope some day to return, but I think it will be during a snowstorm in January just to avoid the masses!

But I did get to take many photos up in the Sutton Hoo exhibit, where the display cases and signage are vastly improved over 1978. 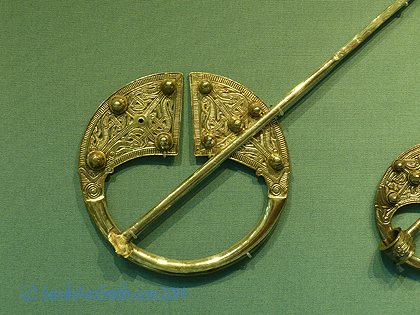 Just LOOK at this amazing ring pin; this one is probably almost 4 inches in diameter, and that pin could be lethal! 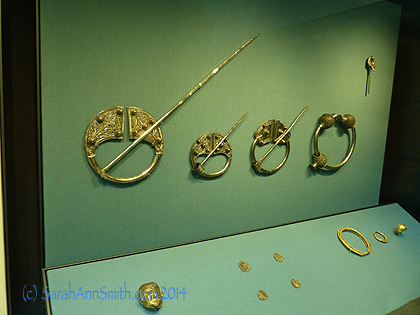 The case with a selection of items, the above pin is on the left. 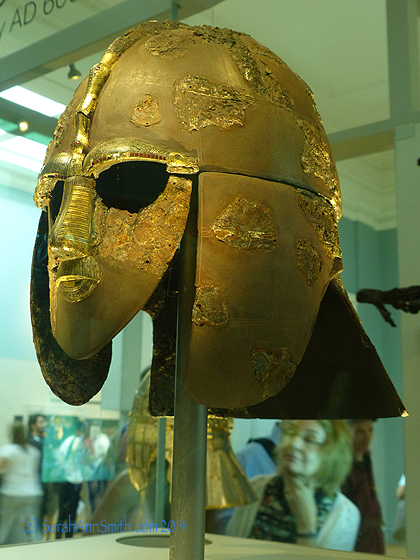 The most stunning item from the Sutton Hoo find is this mask. They believe the ship was for the king of the Anglo-Saxons in East Anglia and dates to circa 724 a.d. These are the remnants of the helmet. 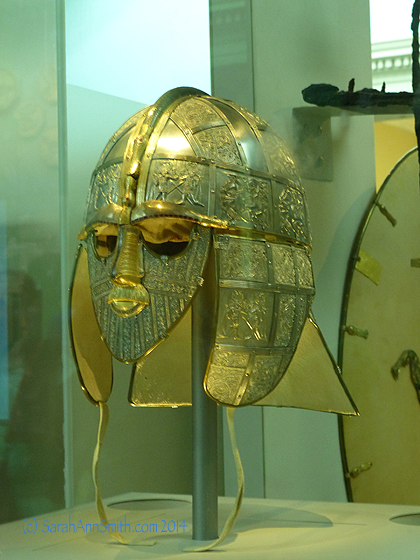 Based on the fragments and knowledge about contemporary helmets and design, they have made this piece to show what it would have looked like at the time of burial, including the garnets on the eyebrow ridges. Simply phenomenal artistry and craftsmanship. 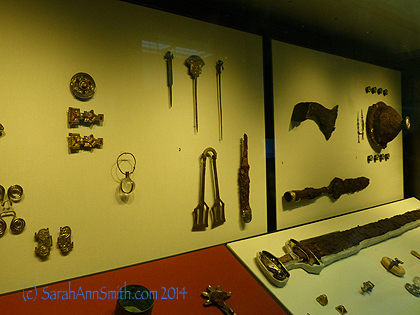 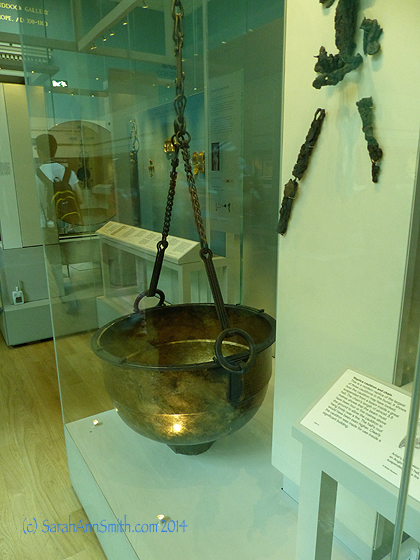 And I am always intrigued by how people lived in olden times. This pot would have been hung from a ridgeline/rafter post over a fire. 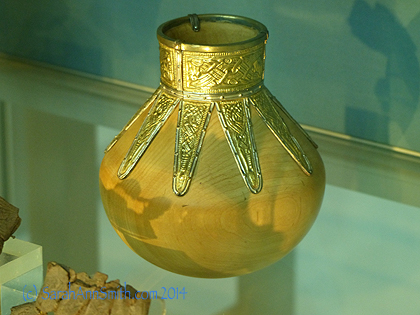 The original gourd had long since rotted away, but the intricate metalwork survived, so they made this wooden vessel to go with the metalwork and show how it was originally made.  Just think of the designs–in calligraphy, quilting, you name it! 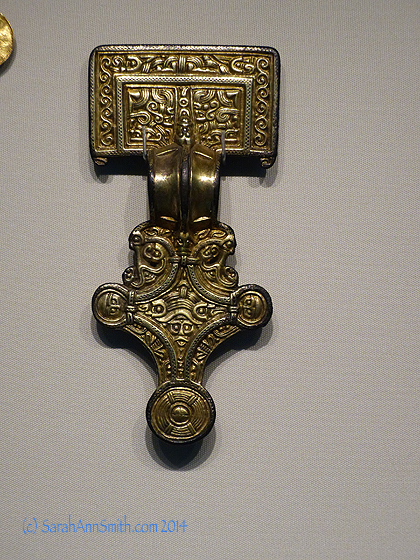 Another buckle component. Look at the faces in those round areas!  If I recall, this is probably three inches or so tall?   The level of detail and workmanship simple awes me. 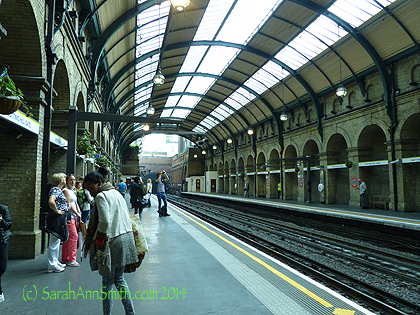 Then back to the hotel to collapse! Time for a good night’s sleep before a long and happy Tuesday. I took this picture of Notting Hill station (remember the movie with Hugh Grant? Yep, that Notting Hill, which is a district in London not far from our Tube stop).  It is one of the stations that hasn’t been gussied up and still has its old character.

So those are the artifacts that sent me back to England–I wanted to see them again, not just in photos, and go to where they had been found.  That would happen on Thursday, but we had two phenomenal days before that one!  There’s more to come!

This entry was posted on Wednesday, September 17th, 2014 at 10:34 am and is filed under Inspiration, Metalwork, Photography, Travels. You can follow any responses to this entry through the RSS 2.0 feed. Both comments and pings are currently closed.