Back in 1989-91, Paul and I lived in Libreville, Gabon, where he was the deputy US Ambassador and, since I wasn’t allowed to work under him according the State Department rules, I was on leave without pay (which was fine by me).  Our nearest neighbors and dear friends were the British Ambassador and his wife, Mark and Lynn Goodfellow.  Mark passed away years ago, but we keep in touch with Lynn.  We were to meet her on Tuesday afternoon, so in the morning Eli and I did the hop-on, hop-off tour of London (which took HOURS), then met Lynn for the afternoon and evening.  It was if 23 years evaporated–such fun! 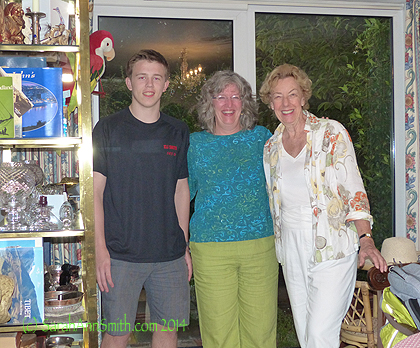 With Lynn and Eli at Lynn’s home in Putney Heath, near WImbledon, after a lovely day

And I apologize in advance for so many photos, but gosh, this is maybe five percent (or less) of the photos that I took–things to remember and design inspiration EVERYWHERE!

Some of the things I noticed:  how CLEAN the air is compared to 30 years ago.  Gone are the diesel-spewing lorries and busses.  The vehicles have much stricter emissions, many are hybrids, and the air is actually CLEAN!  No more coughing on choking exhaust.  And the building–there were huge construction cranes and building and upgrading going on EVERYwhere.   Alas, I had told Eli to expect people to queue up nicely, no pushing, to wait for lights and so on.  At least in London that is no longer the case–it’s more like a big city anywhere.  And the dress:  in 1978, Americans looked American, Brits looked British, the Germans German and so on.  Now, MAYBE some of the French flair will pop out at you, but otherwise  from Japanese to American to British to generic European we all dress alike.  Except for the Muslim women in veils, but even there is a wide range! 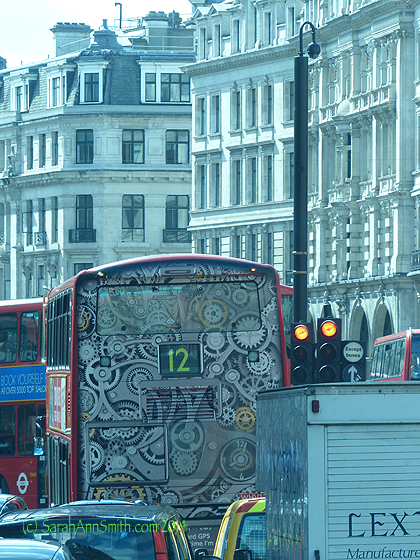 Imagine, design inspiration even on the double decker buses, here on Regent Street in the heart of London. Loved this take on steampunk! 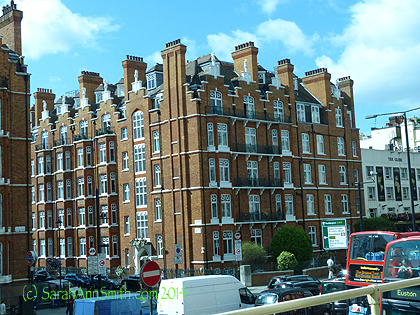 This beautiful building reinforced the dictum to “Look Up.” 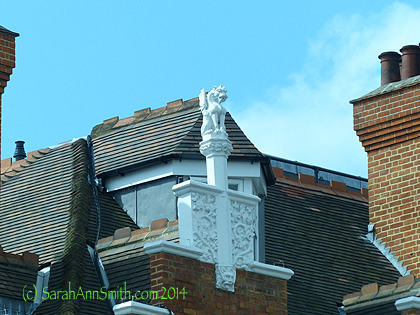 Look at that cool critter up on top and the ornamentation in the base. 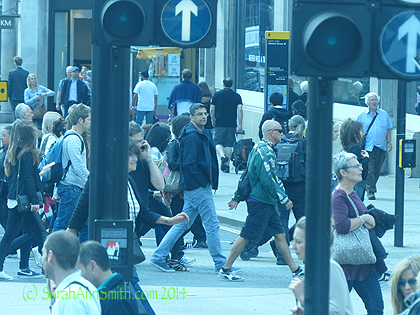 I wish I had thought to switch the camera over to video, here on Regent Street at Oxford Circus. A “Circus” is a roundabout or traffic circle. This was about 10 am on a Tuesday morning. Talk about a swarm of humanity…it made me laugh, and really glad I was on the bus and not IN the swarm! 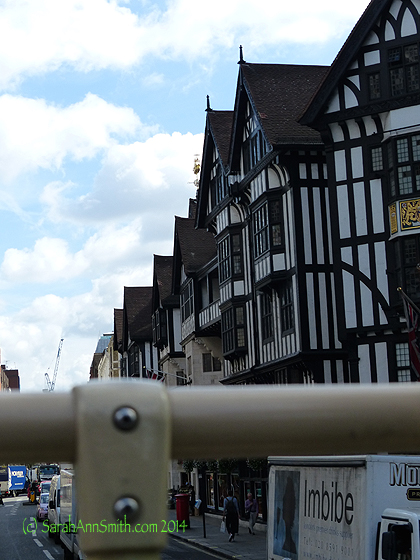 SWOON–that half-timbered building is Liberty, as in Liberty of London, as in all that glorious fabric and more. We did get back there but only for half an hour. Just as well, if I had stayed longer I would be even more broke and have needed a suitcase! 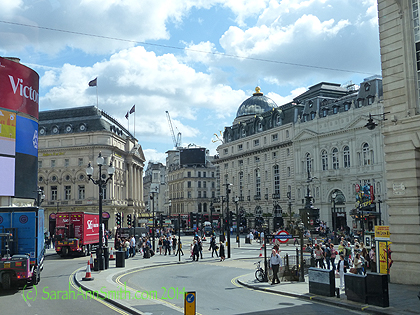 Coming up on Picadilly Circus, traveling on Regent Street. Notice the done on the building on the corner. 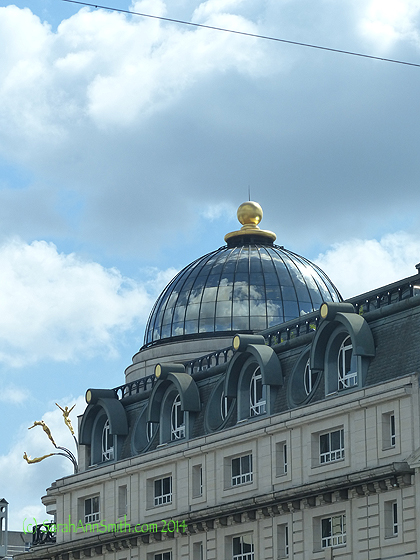 Look at that utterly amazing sculpture up near the dome, a woman diving…way cool! 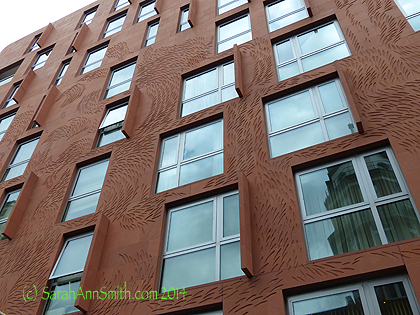 So much of the old architecture is laden with inspiring ornament, but even new buildings proved interesting. Think how dull this modern building would be without that design up the front. Hmmm…that could get translated into a really cool thermofax screen now that I think of it…. 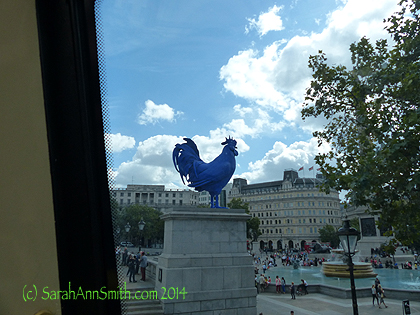 Soon we came to Trafalgar Square, with the National Gallery, St. Martin in the Fields church, Lord Nelson’s column, and this blue rooster. This plinth (base) has been the home for some rotating art. I’ll let you google to find out more about it… but a big blue….ummm…let’s go with rooster…..someone has a sense of humor! 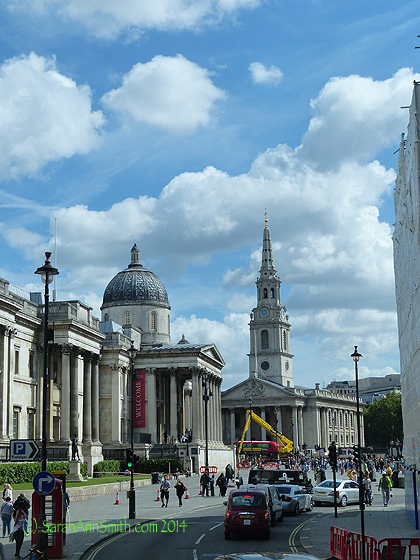 National Gallery on the left…. 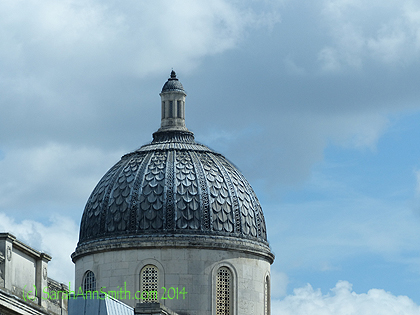 And take a look at the design work on that dome. What a great quilting pattern or background design! 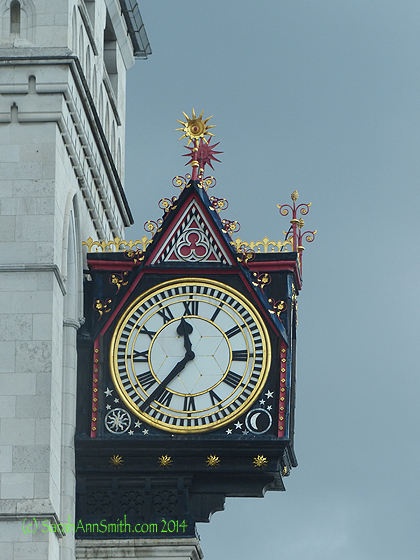 Next we went into the City of London, the original small city. This clock is at the Inns of Court, the justice departments. 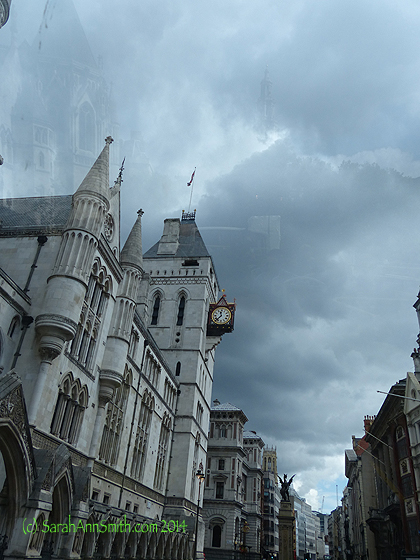 Here’s the fairy-tale-like building to which the clock is attached:. 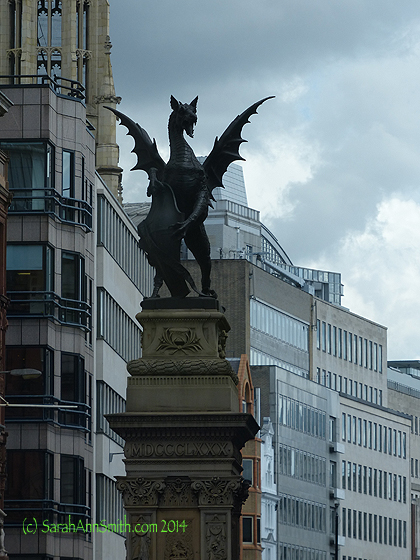 Next we drove along Fleet Street, home to the London press. LOVED the dragon! 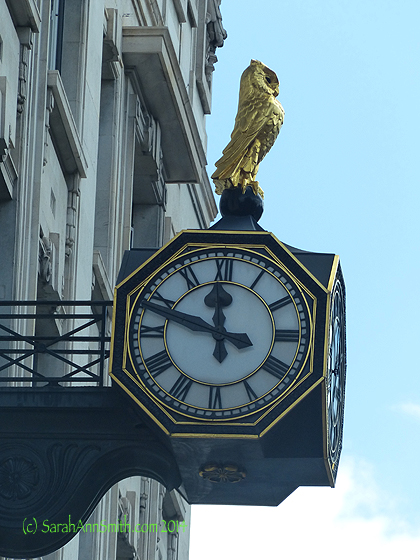 And for my friend Jacquie who loves owls, this clock on a building on Fleet Street. 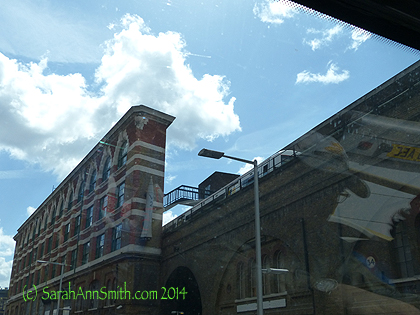 One of the old narrow b uildings next to the raised light rail lines–if you look up a bit, you’ll see the trains. I used to take the train in from Lewisham when I was in school in the 70s. 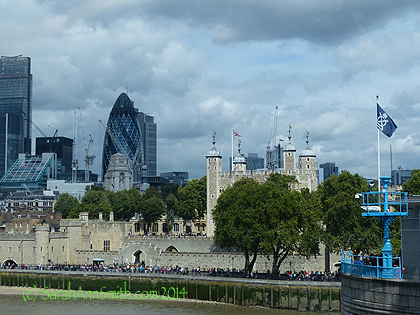 The old and the new: the Tower of London (another place we regretfully decided to skip because it was wall-to-wall people), with the modern building called the Gherkin behind it. 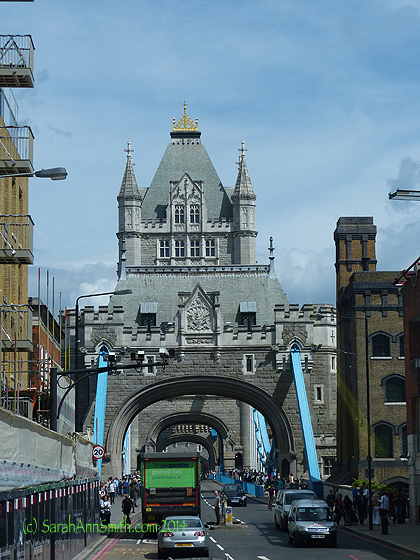 Going across Tower Bridge. The Bridge is a stunning architectural beauty! 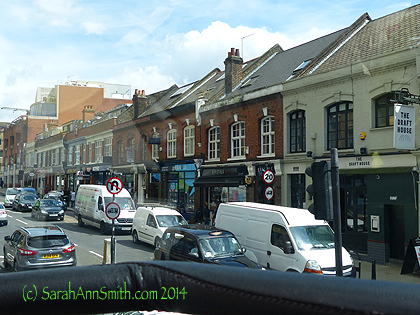 A neighborhood (Belgravia or Chelsea I think) in London 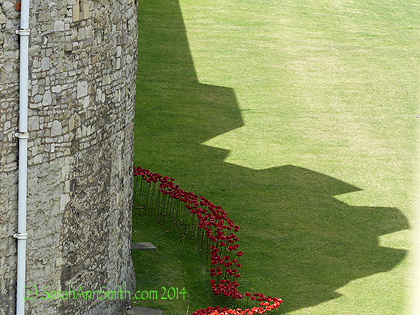 A most stunning artwork-in-progress at The Tower to commemorate those slain in World War 1, as this is the centennary anniversary of the start of that war. Learn more about this Sea of Red  installation here and here.  Red poppies, which grew in Flanders Fields, are traditional in the UK to commemorate those lost in war.  These are ceramic poppies; the last will be installed on November 11th, 2014, armistice day (the eleventh hour of the eleventh day of the eleventh month, our Veterans’ Day).  The Smithsonian article (the second link) said “All told, 888,246 poppies will flood the Tower’s moat, equaling the number of British and Colonial soldiers who perished in the war.  The project, titled Blood Swept Lands and Seas of Red, comes from the creative minds of ceramic artist Paul Cummins and state designer Tom Piper.” 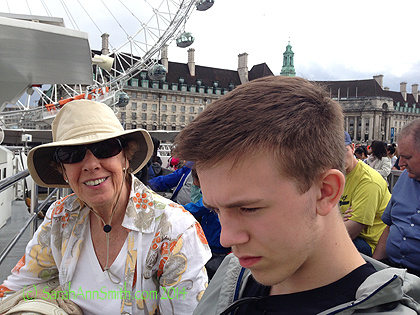 At 1 pm, we met Lynn at Westminster Pier. She said she’d have on a hat. Well, as we walked up I saw a woman in a hat with her back to me in a stance that looked SO familiar, so I called out and indeed it was Lynn! We went on a cruise ship up the Thames from Westminster (home to Parliament, Big Ben and Westminster Abbey) to The Tower and back. It was tons of fun!  Lynn on the left, Eli wishing I would stop taking pictures with him in them. 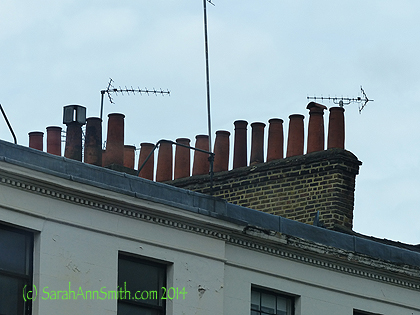 I also had a lot of f un taking pictures of chimney pots everywhere. 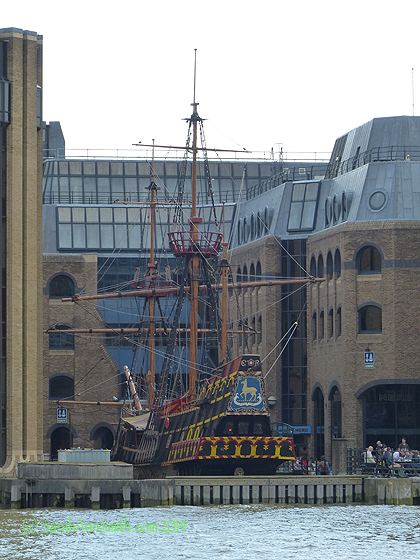 The Golden Hind, a replica of Sir Francis Drake’s ship. Depending on which side of the sword you were on, he was either a hero of Britain or a miserable marauding pirate. He explored the San Francisco bay area and the main artery near where I grew up is called Sir Francis Drake Boulevard, and the public high school is Drake High School. 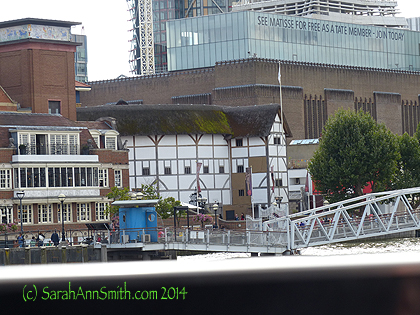 American theatre impresario Sam Wannamaker is a hero in England for his successful efforts to reconstruct Shakespeare’s Globe Theatre, complete with thatched mossy roof, on the banks of the Thames. We didn’t get to any plays…maybe next trip? 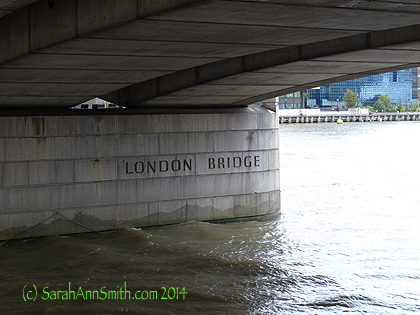 London Bridge is not falling down, and is still in place. It is also NOT the beautiful Tower Bridge, but this rather bland thing. At least I can now say I’ve been under, over and ON the Thames. 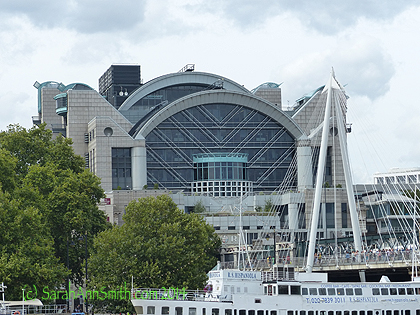 Eli recognized this building immediately as having been the location for MI6, the spy agency, in the last Bond movie, Skyfall. Luckily, it did not really blow up, as it is the new Charing Cross Station (rail and tube). The boat guide told us there was a design competition with the goal to design a building that has train-like…I can see the hint of the old engines in this–can you?

And our next day, the first Wednesday, was a day to remember for a lifetime….stay tuned!  I’ll blog about it in two parts…..

This entry was posted on Monday, September 22nd, 2014 at 7:02 am and is filed under Family, Inspiration, Travels. You can follow any responses to this entry through the RSS 2.0 feed. Both comments and pings are currently closed.