Archive for the ‘Knitting’ Category

Talk about COZY and warm! I fell in love with the relaxed and comfy look of the Sunday Cardigan (on Ravelry) mohair edition and regular edition immediately and knew I wanted a slouchy, oversized hug-of-a-sweater. So I made one! And then I made another. Here’s the second one, which is what I was craving:

Now I KNOW many of you are thinking “mohair…ITCHY!” I agree. But this one is made with Rowan’s Kidsilk Mohair, a blend of mohair and silk and it is heavenly soft and doesn’t itch me!

BUT, before I got to this one, I used up some stash. Yes, I used yarn stash! I had this alpaca boucle (according to the receipt in the bag) about a decade. Ahem. I wasn’t sure if I would have enough, so I made a size medium just to be sure. I couldn’t believe how quickly it knit up. My previous sweater was 24+ stitches to 4 inches. This was 12 (!!!!) stitches to four inches. And it knit up in a matter of a few weeks! It is quite fitted, and I’m fine with that. I like the sweater, it is comfortable, and looks good. But I wanted that huggy-oversized look.

So I bought new yarn at Heavenly Yarns in Belfast, Maine. Thankfully, they got in a new order of the Kidsilk before the current shelter-in-place-followed-by-quarantine-then-extended thing. I wanted mine quite long, so I used just over 4 skeins of Cascade 220 in an oatmeal color (reasonably priced) and four skeins (down to the last 30 inches) of Kidsilk (honestly, a bit expensive) in a soft white. If you want to geek out and are a Ravelry member (free to join), you can see project notes here. The blue version is here. I could have done the math and made a different size of the regular version, but I sprang for the whopping $6 for the mohair edition pattern which did the math for me. My version is a bit of a hybrid: I made the mohair version using one strand of Cascade 220 held together with just one (not two as recommended) strand of Kidsilk and got the gauge of 14 stitches to the inch. Given how warm it is, I’m glad I don’t have another strand of mohair in there!

I opted to make the fold-over collar from the standard version and sew it down as in that pattern (even though I didn’t sew down the collar in the blue one!) and add buttons. I followed the directions in the standard pattern for opening up the stitch rather than making a proper buttonhole. Since I had no idea how long I was going to make mine, that was easier. However I think next time I will do a proper buttonhole that looks better. I also made my sweater longer, with sleeves that are neither snug nor full.

So that’s what I’ve been doing in the evenings while watching Midsomer Murders on Amazon Prime on my iPad. Next up: a pattern hack of Jeri Riggs’s stunning Lily of the Valley vest. I’m attempting to do my own thing and make a linen t-shirt with two columns of the Lily of the Valley motif up the center front, mimicking one of my favorite cloth shirt patterns that has a square neck and short sleeves. The Quince and Co. linen yarn isn’t fun to work with my arthritis, but everyone tells me I will LOVE the yarn once it is all done and washed. About 24 stitches to the inch, so it is slow going, but I’m about 6 inches up from the bottom. Hopefully it will be done by the time it is warm enough to WEAR it! And hopefully we’ll be able to go out!

So those of you who follow me on Facebook know that I’ve been doing a fair bit of knitting this past two years. A while back while browsing in Pinterest, I saw an ad asking for beta testers for a new knitting app by Bellish. I signed up, made a sweater, LOVE the app and as of today! it is available in the App stores, and is currently free (but will probably go to paid at some point). I have been telling local friends and shops about it because it is amazing.

As an intermediate, perhaps advanced, knitter, this app lets me do what I’ve always wanted:  customize a design for my taste and figure, and it is EASY.  I signed up as a beta tester when only one base design was available.  I was easily able to turn a crew neck pullover into a cardigan with lace panels on either side of the button band and down the back, add waist shaping, and it fits **perfectly.**

The row counters are so easy to use—keep the phone by your chair—and keep you on track.  So does being able to check off a section done and using the Checkpoints to make sure you have the correct number of stitches.  I’m looking forward to even more base patterns.  I’ve recommended this app to friends and in knit shops whenever I can.  Imagine being in a shop, falling in love with a yarn, and right there in moments generate a pattern that tells you how much yarn to buy!  LOVE it!

SO, if you like to knit, open up your App Store (both Android and Apple/ iOS) and download this currently-free app! Yuppers, it’s five stars from me. I’m a happy sweater-wearing camper! I’m waiting for top-down cardigan with set in sleeves as a base…fingers crossed 🙂 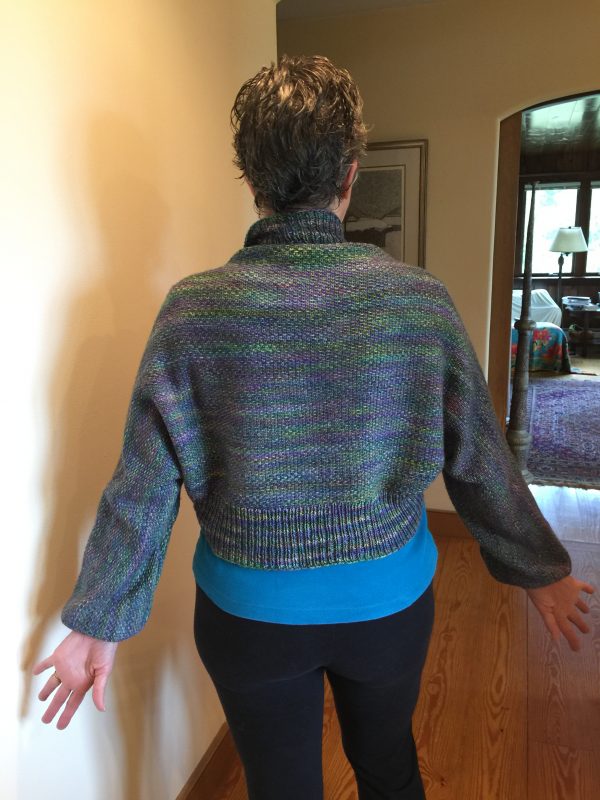 So, once again, I can’t quite do things the way the pattern says LOL!  Last summer, I knitted Ashley a gray shrug using the Biston pattern on Ravelry.  It was lovely and knit up very quickly and easily (especially since Ashley is a size 2).  Thought I’d knit up something quick for me this summer.  Right.  Not.  Bought this glorious yarn, Malabrigo Rios in the Indiecita color way, which has blues, greens and some purple (but not an obnoxious amount of purple).  After doing a test swatch in various stitches, I chose a stitch that showcases the yarn but is rather slow (at least for me, I’m not a fast knitter). 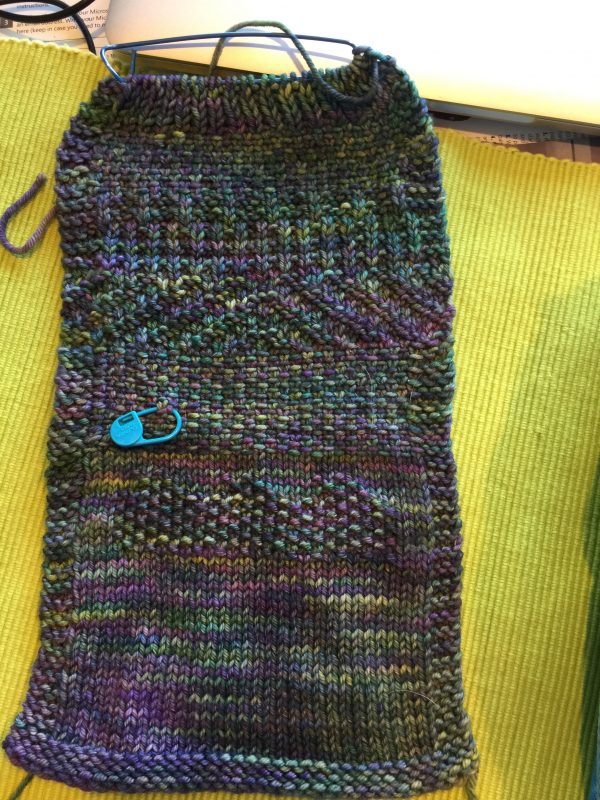 Sarah’s test swatch included from top to bottom: 1×1 ribbing, linen stitch in three different gauges, a broken rib, the broken/chevron rib from the Biston pattern, a knit-purl diamond motif, seed stitch, stockinette and a garter stitch at the start/bottom and edge.  So glad I did it because I wan’t wild about the look in stockinette (hence all the other variations), and was able to learn that the linen stitch on smaller needles resulted in a fabric felt stiff. 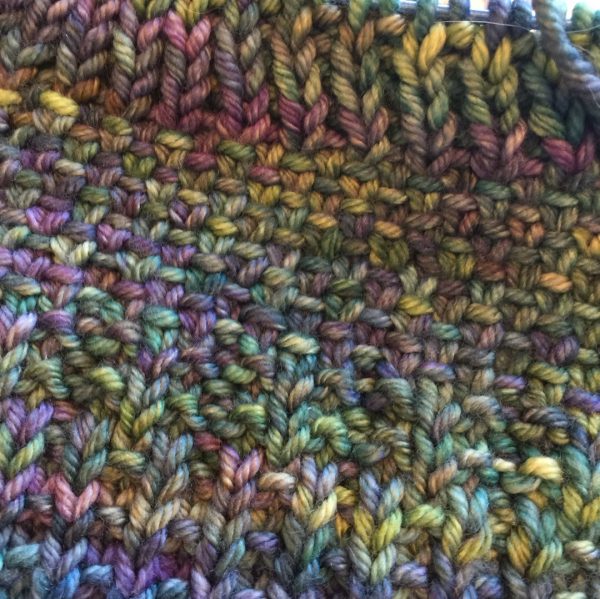 Detail of the linen stitch I selected and the 1×1 ribbing I decided to use. 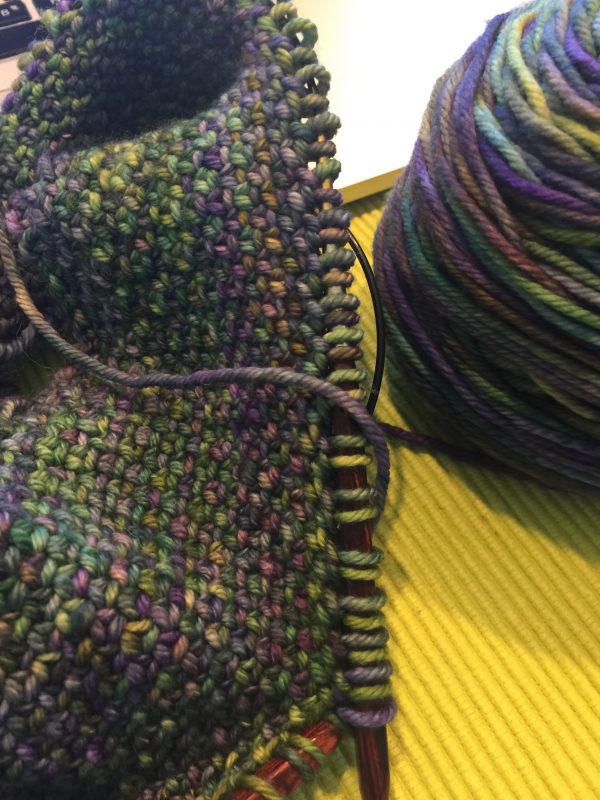 As of this week DONE! I used the basic measurements from the Biston pattern, but instead of knitting cuff to cuff in stockinette, then seaming and adding the nice chevron rib collar, I wanted the direction of the linen stitch to run horizontally across my back. So I cast on for the lower center back, increased 10 stitches at either end of each row five times, then 15 stitches twice, until I had enough to go almost from wrist to wrist. I alternated skeins/balls every 2 rows to prevent color pooling from the dyeing pattern on the hank.  The cloth ended up being thicker and warmer than I had realized it would be, so it became a winter shrug, not a summer bolero. 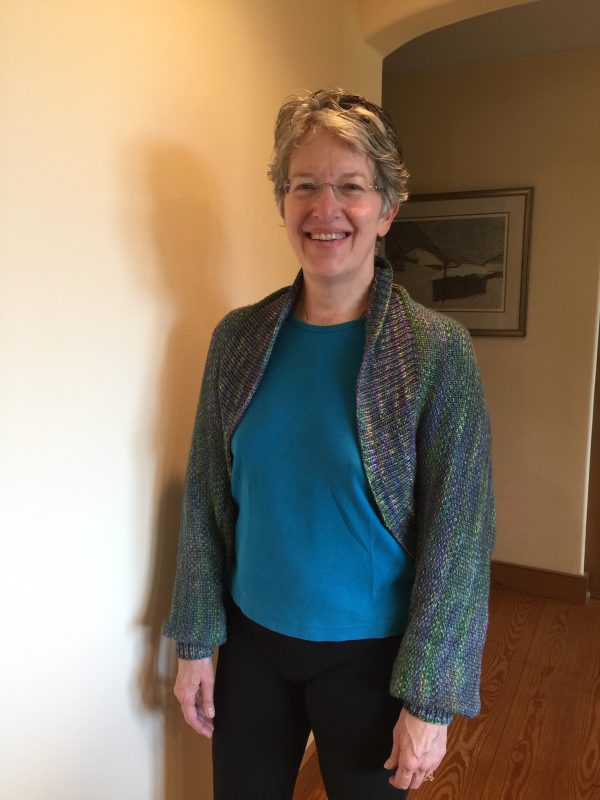 From the front. Because the yarn relaxed a lot with blocking, it does seem to slip open a bit–it fit perfectly before washing. I may try again and see if I can wet and block it again and make it not-so-large!

That meant I knit until the whole main part was 16 1/2″ long, then started tapering down to equal the increases. I did a slip stitch at each end. I bound off for the length of the sleeves, but kept the remaining stitches live on the needle. After testing on the swatch, I decided a simple 1×1 rib would look best.

After sewing the sleeves, I knit the cuffs. I calculated how many stitches I wanted to fit my thin wrists (32 I think) and picked up a stitch in every other slipped stitch, which gathered the sleeves in nicely. In a better universe, I would have tapered the sleeve portion more, but I wasn’t about to frog a summer’s worth of knitting and opted for a gather. 1×1 rib for 27 rows which is a bit under 4 inches long.

Collar came next: I picked up some stitches around the seam area, then picked up stitches one to one. Knit 27 rows, bind of in pattern. 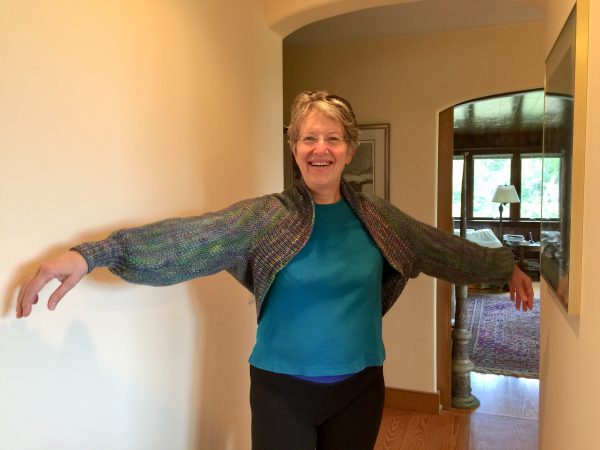 Blocked. I have learned that the super wash yarns apparently have a propensity to GROW and get LONGER. I’m fine with the extra length down my back, but I have about 4-6 more inches in length from wrist-to-wrist than I had before washing. I will try to shorten this with blocking shorter (have asked for foam blocking squares for my birthday), but I am falling out of love with the concept of superwash if it always grows like this. Even washing and blocking your swatch doesn’t really convey how MUCH it will grow when a full size garment.  If anyone has any words of wisdom, please DO share!

Still, I love this and know I will wear it a lot in winter. I love the look of the linen stitch on the hand-dyed wool, so I just need to find a hand-dyed wool that I like the feel that doesn’t grow.

Weighs 491 grams, so that is allegedly just under 5 skeins, but I actually used just a bit over (plus the amount for the swatch). Don’t mind that I have nearly a skein leftover–it will be pretty in something.

I’m on Ravelry — if any of you are over there, you can find me at https://www.ravelry.com/people/SarahAnnSmith

Posted in Knitting | Comments Off on Knitting a shrug