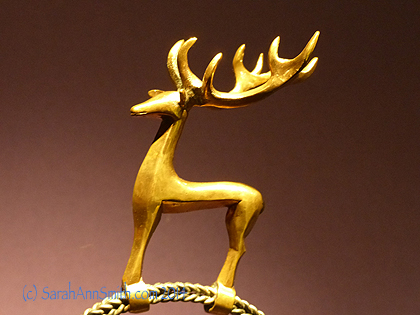 From a staff, at Sutton Hoo Burial Ground, near Woodbridge, Sussex, England

Back in 1978, I saw the Sutton Hoo artifacts at the British Museum for the first time.  And I NEVER forgot them.  The incredible artistry in the gold and silver works was stunning, especially because they were made in circa 625 a.d.   Seeing them again so many years later, they are still astounding.   As I mentioned in this post, which has lots of photos, you can see them at the museum and go to the burial grounds now (the lands were not public back in 1978).

This post is about our visit to Sutton Hoo Burial grounds. 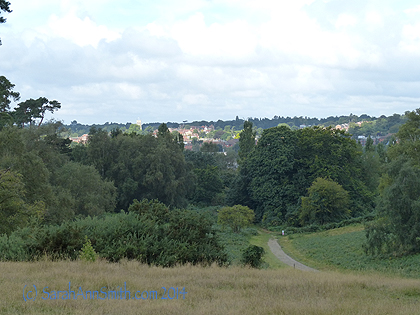 Eli and I arrived before the facililty opened, but after the grounds opened. Owned by the National Trust, families may come and visit, picnic, hike the grounds. So we did! This photo is shortly after we began our walk looking at Woodbridge in the distance, just across the river. Think of rivers as the interstate highways of the days of yore–if you wanted to get some place in a hurry, going by water rather than overland was the way to do it. It’s only a few miles up hill from the river to this place. 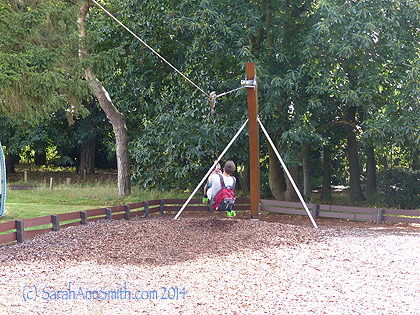 On the way to the path in the photo above, we passed a playground for families with squirrelly kids who need to burn off some energy. This includes 16 year olds . As we found ourselves saying across England, isn’t this a great playground, gosh this would never exist in the US because somebody would sue somebody else if a kid got a skinned knee. Imagine, a zipline (low down obviously) in a playground! 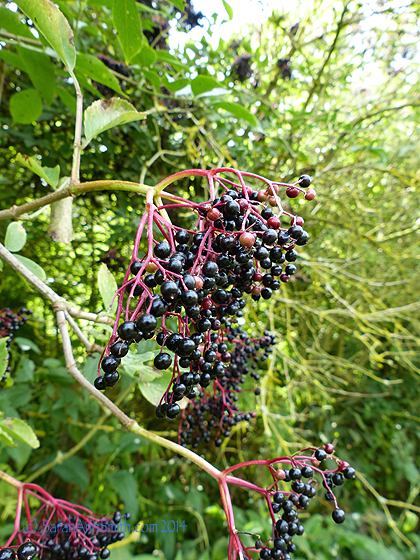 There were blackberries and these berries in abundance. Eli and I snarfed quite a few blackberries, reminiscing about San Juan Island. I think these are currants, but wasn’t sure so we didn’t test taste any. Great art inspiration though.

Trees. England does trees. BIG trees. Majestic trees. Trees made for climbing. Eli is a climber. By 6 months of age he could clamber out of his high chair, climb into his high chair, in and out of his crib by 18 months (hence the early switch to a bed with guard rail).   Keep in mind it would take multiple adults to hold hands and hug this tree, that’s how big it is. 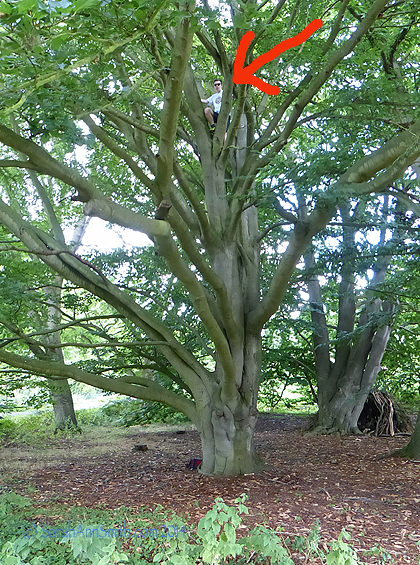 Now look UP. Waaaaaay Up. Yep, that’s my boy!  He is 5’9″ tall, so he’s WAY UP.  I did not pass out from holding my breath.  Barely.  I have this irrational fear of falling which extends to my kids, too.  But Eli LOVED it! 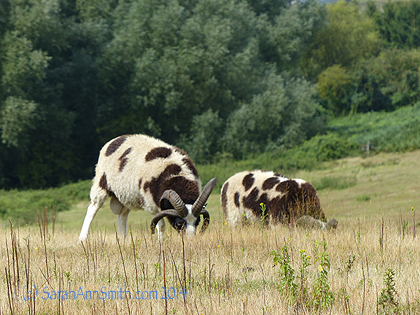 On the walk, we passed a farm and these awesome four-horned sheep, which someone on Facebook (where I posted some of the pics during the trip) told me these are Jacob’s sheep. Cool! More inspiration. 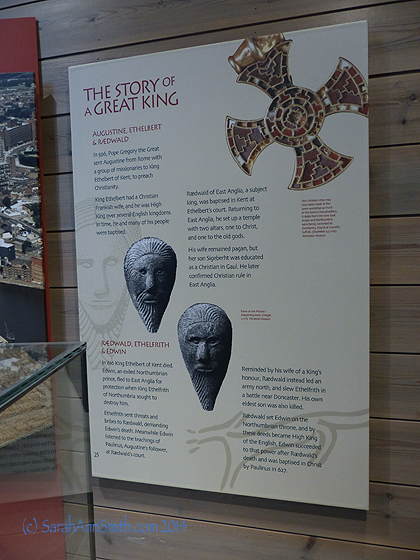 At last, time to go in to the Sutton Hoo facilities, then go on our walk of the grounds. 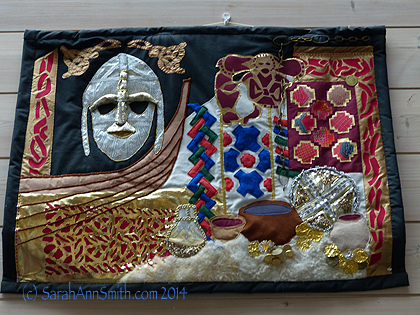 And wouldn’t you know it…opposite the register/till where you pay your entry fees, a quilt! WOOT!  Wish I knew who made this.  If anyone knows, please tell me and I’ll add the information! 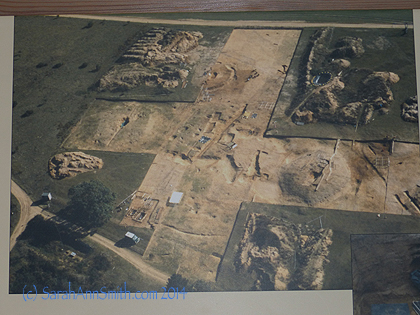 I bought a book about the site which has this photo that shows some of the area that was excavated. Burial mounds were subject to frequent raiding over the centuries and many of the magnificent artifacts were looted. 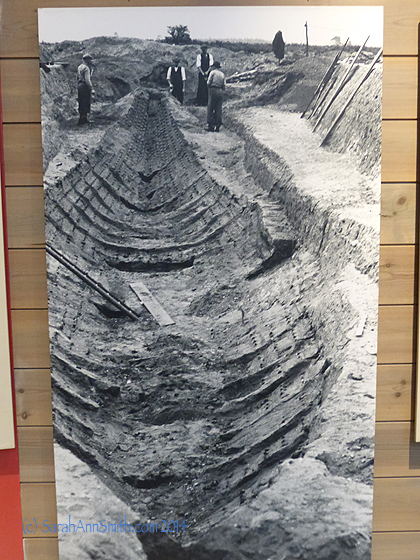 A burial ship being excavated back in the 30s. The burial mound that was source of the most stunning Sutton Hoo artifacts, however, had partially collapsed, so the grave robbers missed the center point (where the good stuff is usually buried with the deceased). That meant it was STILL THERE, and now lives in the British Museum.

I took about a thousand (well, maybe a hundred) photos in the exhibit area, and as many as I could manage while we had our tour of the mounds. This was the only day it rained, and it POURED.  The heavens opened.  We got rather wet despite having good rain gear.  But it was still cool! 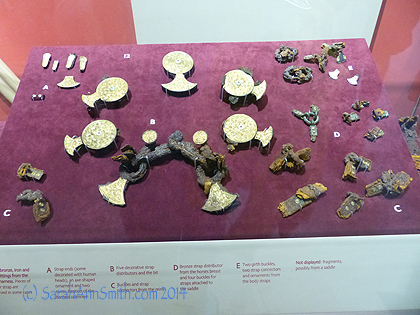 Here are some of the artifacts of a horse bridle at the Sutton Hoo facility. Other items at the facility are reproductions, as the British Museum has a huge building and massive security for the gold works. 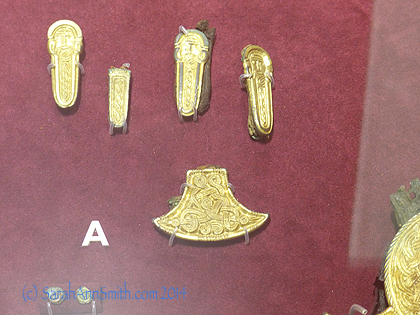 A closer view of the goldwork. Aren’t those designs amazing? 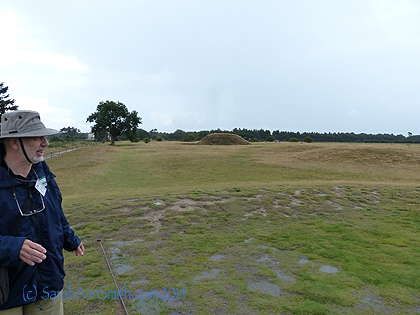 Our guide and some of the mounds in the burial grounds.  In this photo we are standing atop the mound where the most stunning artifacts were found. 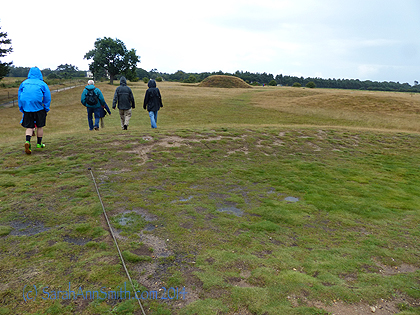 And Eli on the left, daypack under the jacket, walking back to the exhibits area.  A dream of 15 years to visit here, since I heard the public could finally get access.  Contended sigh. 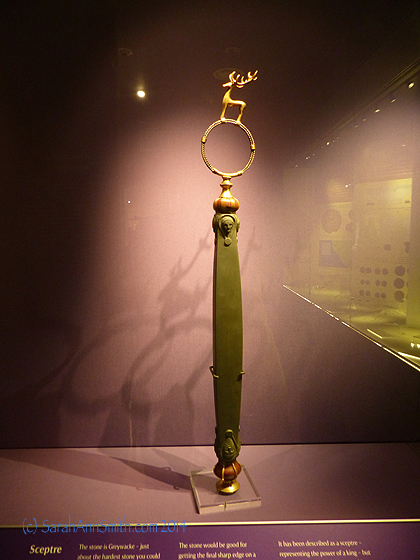 And that photo up at the top, here’s the staff/sceptre. Incredible! 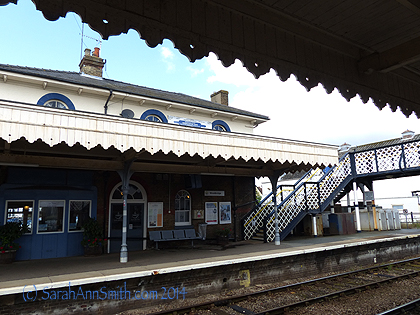 Here’s the Woodbridge train station that afternoon, where we began our 4 hour journey (three trains) to York. 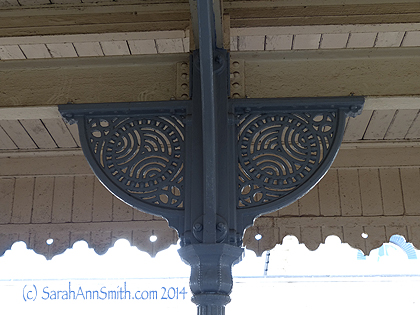 More design inspiration in the supports at the train stations.  A thermofax screen perhaps? 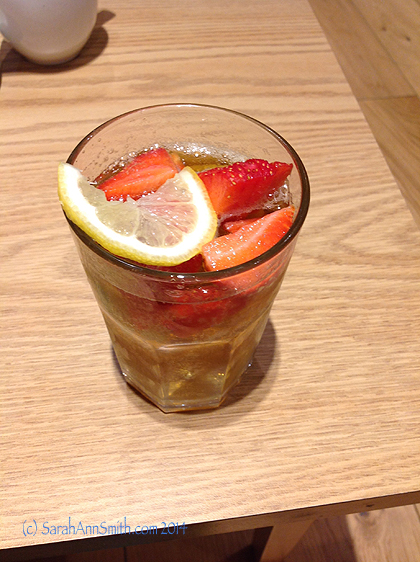 At the YHA (Youth Hostel Assn.) York Hostel, my first ever Pimm’s. It will NOT be my last: cucumber, strawberries, 7 Up, Pimm’s, citrus over ice. Summer perfection.

Next up on the England trip, York!   But quilty goodies in between, too.   Stay tuned!

This entry was posted on Tuesday, October 21st, 2014 at 9:32 am and is filed under Inspiration, Travels. You can follow any responses to this entry through the RSS 2.0 feed. Both comments and pings are currently closed.