Speak Up, Speak Out

Emerging briefly from the production tunnel to share my latest piece which, thankfully, I CAN share despite the fact I’ve entered it in the Threads of Resistance Call for Entries (Deadline in about 2-3 days)!  As many of you who have known me for a while know, I haven’t usually been politically involved or spoken out.  This is, in part, the legacy of being a federal employee, when you were not allowed to be political (there were ways you could do it, but it was such a fuss that it was easier just to NOT).   However, the last election cycle aggravated me so much I began making political posts and comments on Facebook and getting involved.   Even though I didn’t really have the time, when a group of art quilters got together with this exhibit concept and called for entries, I knew I wanted to try to make a piece. 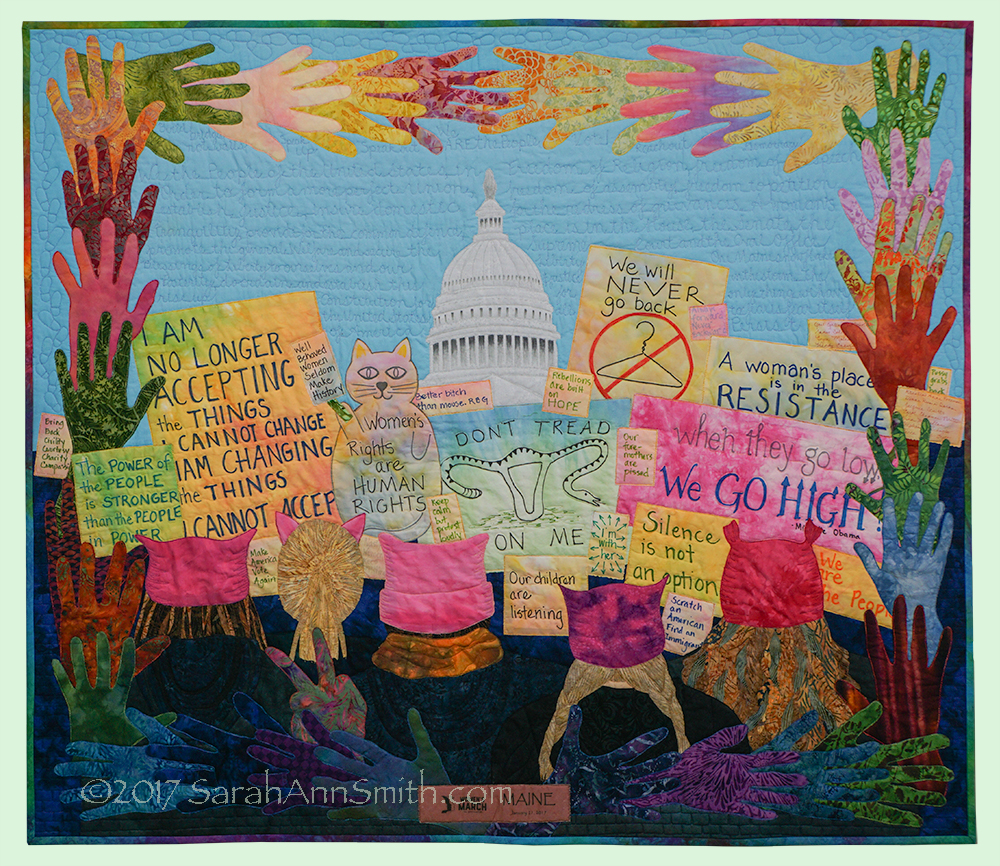 Speak Up, Speak Out © Sarah Ann Smith 2017. Although the Women’s March imagery has become ubiquitous since the March, I decided to proceed with my concept because it was my experience.

It began during one of the debates last autumn (2016).  The then-Republican-candidate (I *refuse* to use his name) kept saying “Make America Great Again,” as if it weren’t great already!   I will be the first to say that we are an imperfect union, this great nation of ours, but that is part of why we are a great nation….or were and must recover from the collective idiocy currently gripping the country.  I started sketching during the debate and came up with two ideas for art quilts, one about Maine, one about our nation.  The latter was to have a border of hands, holding hands, and phrases and words that represented the US, but the center wasn’t yet clear to me.

With my soon-to-be daughter-in-law Ashley G., I traveled to the Women’s March on Washington on an overnight bus (overnight going and returning…LONG nights sitting up!).   I bought a cheap spiral notebook and asked riders on the bus, if they wished, to trace their hands so I could use them as the border in this piece.  Every hand traced is here (one twice, because I needed one more hand to make things fit properly).

At the March, I took many many photos and as the day wore on I knew that being in this sea of humanity, most in some sort of pink hat or cat ears (reference to the-one-who-shall-not-be-named joking that he would grab a woman by the pussy–slimeball! that’s sexual assault you jerk!) I had found my image for the center of the quilt.  The images of women and men marching, protesting peacefully (not a single arrest!), has since become ubiquitous.  So much so that I considered NOT doing this view because it has been seen.  But I decided that since I conceived of the quilt before the march and finalized during the day of the March as the images had barely first been seen on the internet, I decided that since it was also “my” March, I would proceed.

This photo became my starting point–it is the only photo I didn’t take (since I’m in it..someone on the street offered to snap pics for us): 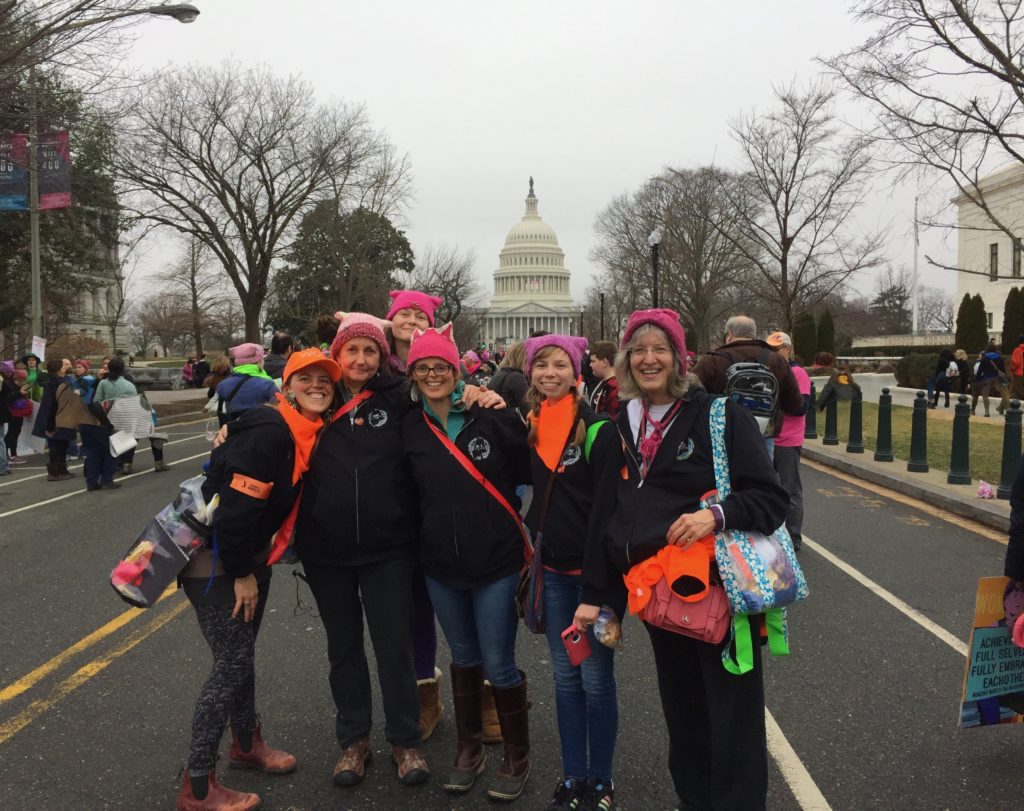 Some of the ladies from the bus. We are on East Capitol Street heading toward the Capitol. Mainers were to wear blaze / hunter’s orange. I’m on the far right standing next to Ashley, who has her orange scarf on, and we’re wearing the hats I made us.  There is an odd aberration in the photo, but so it goes.  I printed this photo on the label.

Usually when you see photos of protest marches, so many of the signs are manufactured, a printed graphic done by someone professional (ish).  What impressed me about this March is that almost all–upwards of 95 percent–of the signs were homemade and many were clever and/or inspiring.   I selected my favorite ones and used them.  One of the signs in the quilt is the actual sign that I made and wore on my jacket during the March. 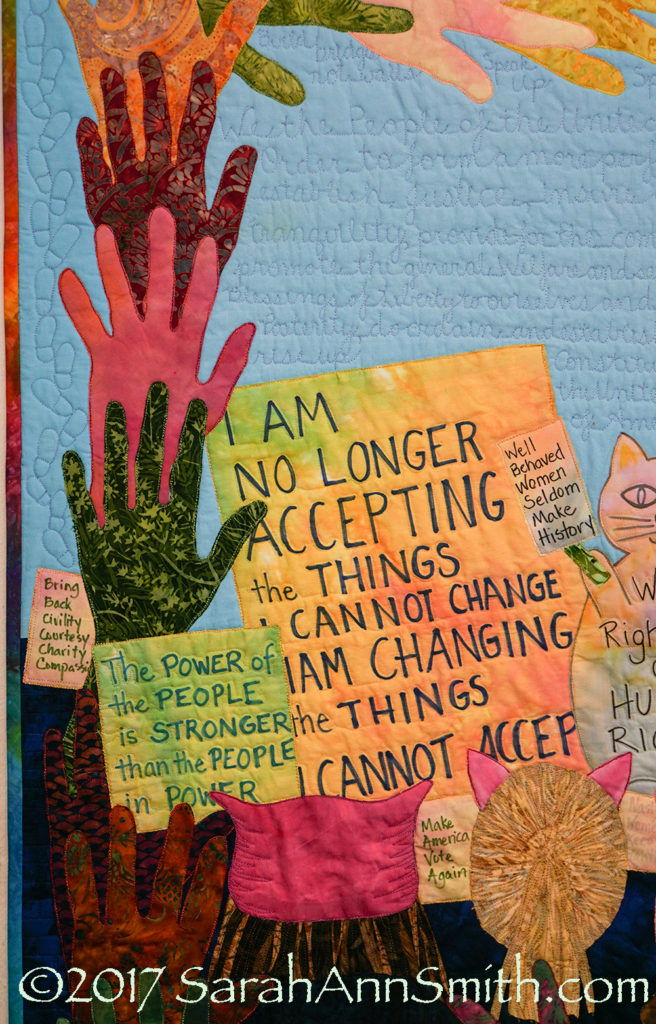 Left side of the quilt. I loved the sign calling for a return to civility, courtesy, charity and compassion.

In the sky above the marchers, surrounding the capitol dome, I quilted the Preamble to the US Constitution on the left.   Brief signs/slogans are under the hands at the top.  On the right I quilted the First Amendment’s four freedoms of speech, religion, assembly, and right to redress the government for grievances (which is what we were doing!  Democracy living and in action!), as well as more slogans and thoughts.

There were three huge signs in the shape of cats, maybe 4 feet tall, so I appropriated one of them to use. 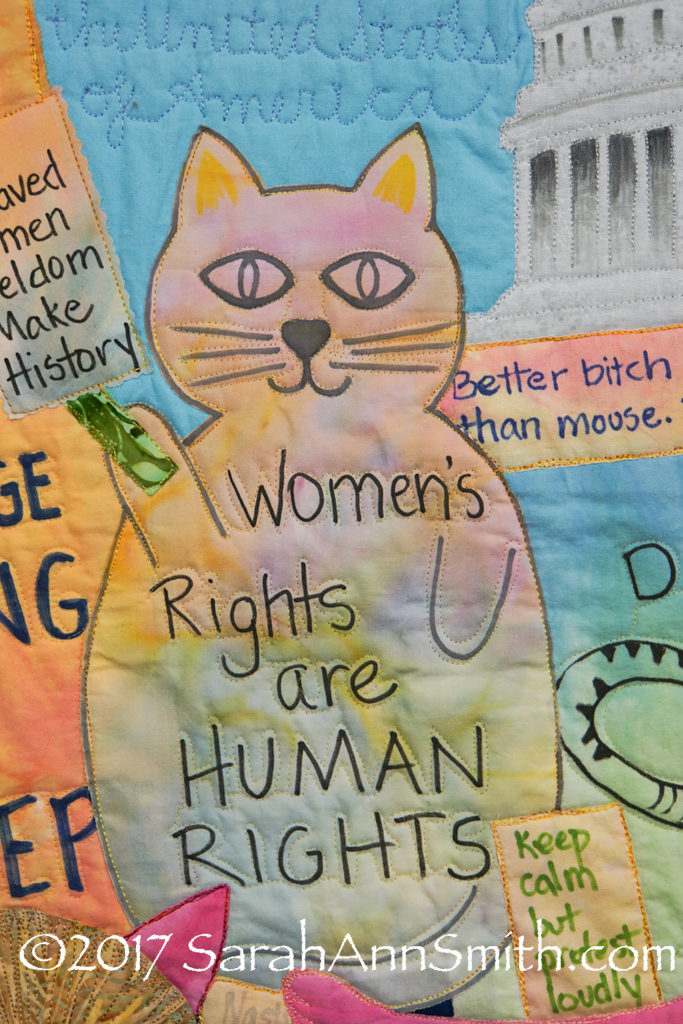 Center left. I LOVED the quote attributed to Supreme Court Justice Ruth Bader Ginsberg (I think I am falling in love with that woman!) and made sure she really did say it before including “Better bitch than mouse” as one of the signs.

By the way, I used Fabrico felt tip pens and Pitt Artist pens (brush and bullet tip) for the signs.

When I graduated from Georgetown University (in DC) in 1979, a t-shirt was popular that said “A woman’s place is in the House, and in the Senate.”  At the time, no woman had been elected (or maybe just one or two…I’m thinking Margaret Chase Smith and Nancy Landon) to the Senate that had not gotten there by taking her late husband’s seat.  It was still common to be told that a woman’s place was in the home and the kitchen, not the office.  Now I’ve said “A Woman’s place is in the House, the Senate, the Supreme Court and the Oval Office!” 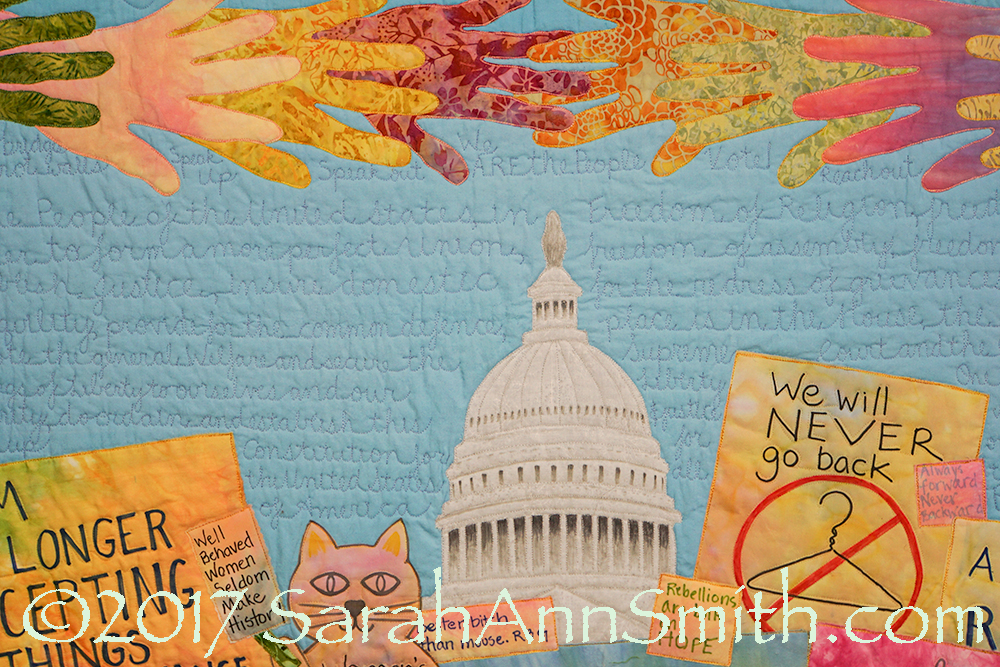 Center of the quilt. I was really pleased at how the dome turned out. I used my photo as my guide and sketched out the pattern, cut the shape (as usual I am using Mistyfuse on fabric and raw edge collage; the dome is a rare case of me using a print fabric instead of a batik. The peach-yellow hand on the left is my dyed fabric, the salmon-pink-purple on the right is Laura Wasilowski’s, from a fat quarter from a class I took with her.  The fabrics in the signs are mostly my hand-dyes.

The coat hanger sign is a combination of two such signs that I saw.   I loathe the idea of abortions. But when I was in my 20s, I was a US visa officer.   I was processing the paperwork for a British man’s visa based on his marriage to a US citizen.  When you do that, you need to establish that the marriage is legal and valid, so you need to see if there were any prior marriages and, if so, that they ended legally.  He was a widower.  To break the tedium, I used to look at cause of deaths when these cases came across my desk.  His first wife died of septicemia (blood poisoning) from a self-induced abortion (because it was illegal in the UK at that time). Ever since, I have stood for freedom of choice because there will ALWAYS be women who are that desperate, no matter how awful I or others believe abortion to be.  Moving on…back to the quilt. 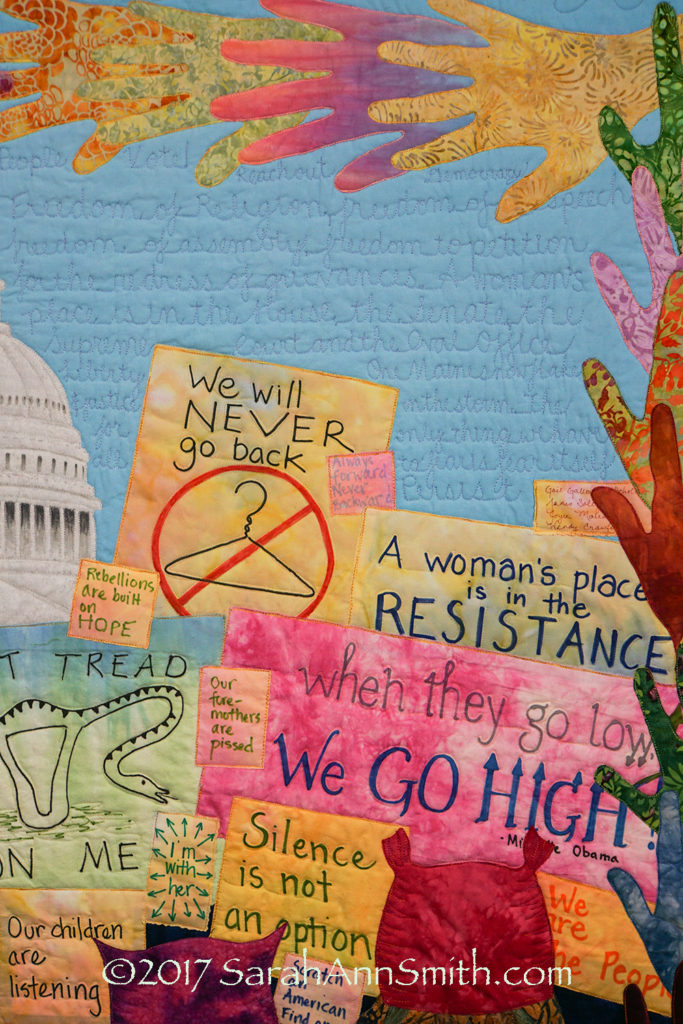 Center right. I loved the take on the Don’t Tread on Me flag from revolutionary war times that turned the snake into a uterus and says Don’t Tread On Me (on left, on Laura Wasilowski’s fabric).  The big pink sign with Michelle Obama’s mantra is what I wore at the January 21, 2017 March on Washington.  That’s my DIL Ashley on the left in this photo, me on the right. I modified a sign carried by a Vermonter to read (in the sky writing) One Maine snowflake in a storm. 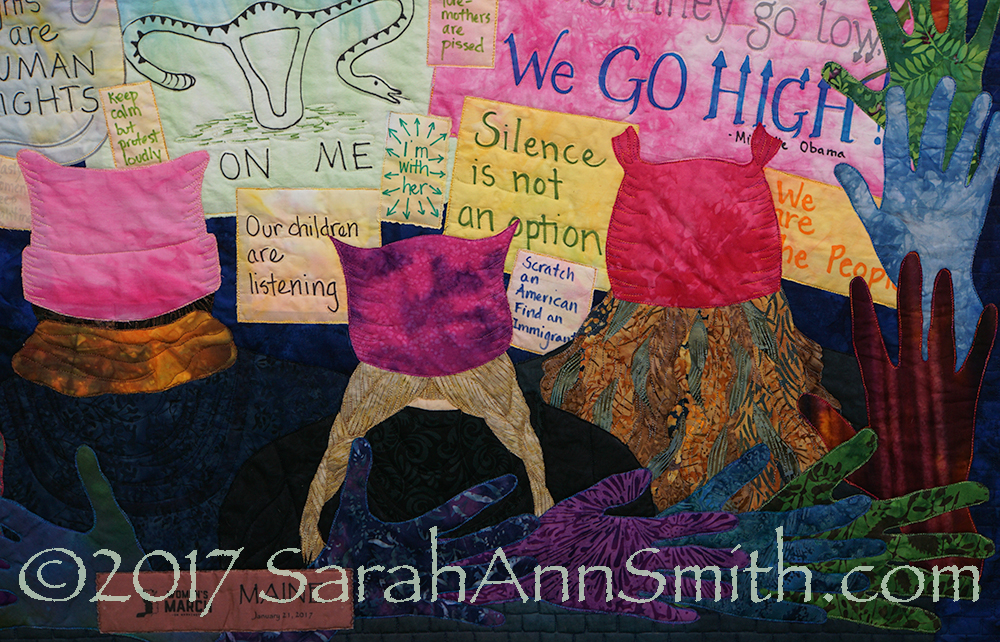 Center bottom right. A bit sharper photo.  In the bottom left, under the copyright, you can see a “ribbon.”  The center woman I think of as “Everywoman.”  Then there is Ashley (DIL) in braids, and me on the far right.  Ashley’s hand is the purple one at her right shoulder, mine is the blue one next to Ashley, one in from the corner.

Some generous unknown-to-me person who couldn’t go to DC made and gave away these ribbons to those from Maine who marched. It was done in the Mainer’s blaze/hunter orange. That was pretty bright for the front of my quilt, and I didn’t want it to distract from the imagery. So I scanned the ribbon into the computer, then in Photoshop darkened the color so that it would work visually on the front. THANK YOU whoever made these! 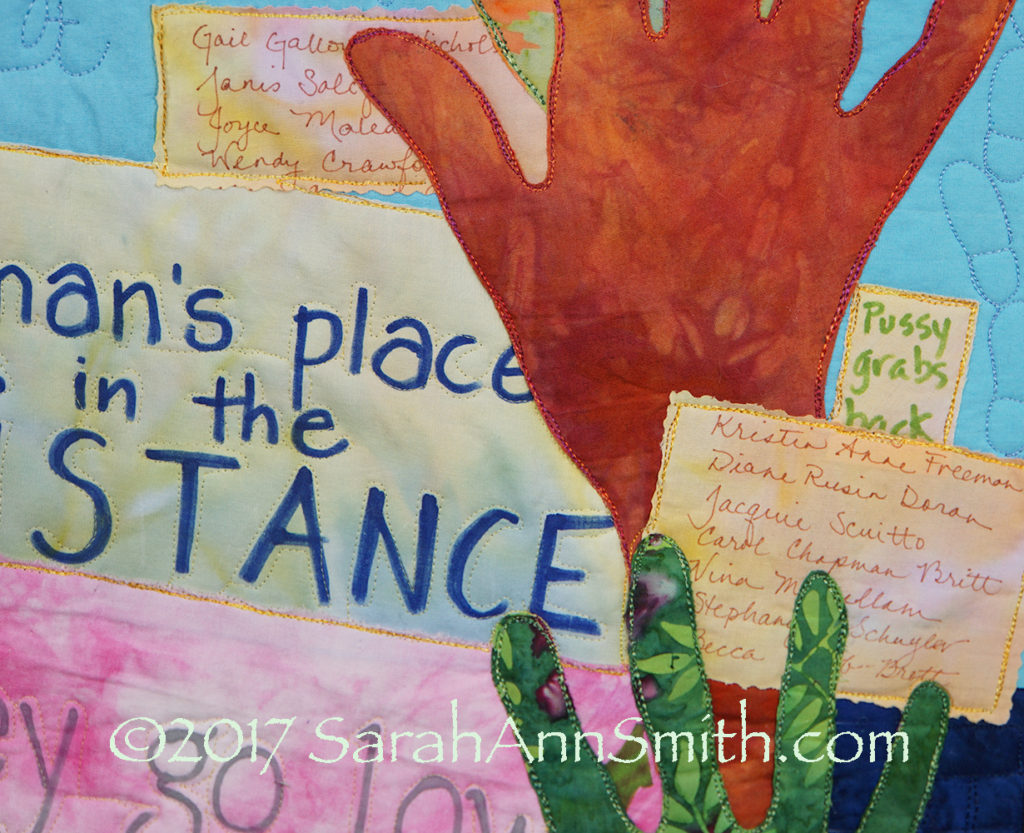 Far right. My friend Gail Galloway-Nicholson used to be the Curator for the Supreme Court so is as familiar with Capitol Hill as I am, if not more so from having worked there for a good bit of  her career..  I worked for a US Congressman for two years, and we also lived just two blocks behind the capitol (yes, I got to see our old house).  She asked me to carry her name in my pocket since she couldn’t go to the March. I did, and added the names of more friends (some I’ve only known via the internet and quilty stuff).  Thank you all for being there with me!   I love knowing you and that you wanted to be there in spirit and on the cloth!

So that is all the details, well, most of them, of what went into this quilt.  Don’t know if it will get juried in–I know there is some awesome art being made for this that doesn’t use the ubiquitous image–but I am glad I made it!

And I have decided to get involved volunteering for my Town of Hope, Maine.  I decided that one needs to put your time where your mouth is, and as the saying goes, all politics is local.   Here’s to giving back to my adopted-shoulda-been-born-here home state of Maine!

This entry was posted on Thursday, April 27th, 2017 at 9:36 am and is filed under Art, art quilting, Exhibiting, Fusing, Inspiration, Machine applique, Machine Quilting, Mistyfuse, Photography, Politics, Quilt Inspiration, Travels. You can follow any responses to this entry through the RSS 2.0 feed. Both comments and pings are currently closed.

23 Responses to “Speak Up, Speak Out”