As I transition to holding online classes to supplement live and in person classes, I needed an overhead view of my work table. The traditional way to do this (outside of a fancy filming studio) is with a “C-stand” that is sturdy/heavy, stands on the floor next to your work table and has a boom arm that extends over the table. Then you hang the camera/iPad/iPhone from the boom arm. Cue COVID delays in shipping. I tried the one I could get in time for this week’s Perfect Bindings class at the first ever Mancuso online shows. The accessories didn’t fit the boom arm. Back they went!

The wooden “light stands” were built based on information from Holly Knott’s wonderful “Shoot That Quilt” section on her website about taking great photos yourself of your quilts to enter in shows and magazines: two pieces of 2×4 lumber and four cheap shelf brackets for each stand.

Joshua, our older son, did some electrical work for Mom and Dad (us) a while back, and introduced us to something called Unistrut. Link here. It is a bit heavy, which is why I looked at C-stands to begin with, but that is also its virtue: it is totally rigid. Rigid helps keep your camera (in my case my iPad) stable.

SO if you are wondering what your teachers does to get ready for you, this is just one small but vital component. If you are going to TEACH online, I hope this helps you–please feel free to ask questions! MASSIVELY HUGE thanks to Lyric Kinard for her help on so many things on the technical side over the years, and to Lee Chappell who gave us newbie online teachers for the Mancuso show a studio tour by Zoom to share with us how she set things up. And THANK YOU to my wonderful, creative son who comes home and always wants to do some sort of “fix up” something for his mom and dad. Joshua, you ROCK!

Those of you who have surfed into my blog over the past two weeks or so will have noticed a completely new look to my site. Thanks to Derry Thompson of GloDerWorks and inspiration from several top art quilters with great sites, I think Derry and I have come up with a gorgeous new site–my first complete makeover since creating the site in 2004. I am responsible for (guilty!) the visuals, and Derry has done all the brilliant work behind the scenes to bring my vision for my site to life.

I still have a LOT of work on my end: thanks to the vast changes in the internet since 2004, I pretty much need to re-do ALL of my photos for larger size and crisper photos. Thankfully, I have a better camera, a tripod, lighting, and better skills at both photos and Photoshop so the image looks most like the real quilt. But I didn’t want to wait for months before sharing the “New Look” with all of you. Stay tuned as I update one gallery at a time.

Some of my favorite new things:

My inspiration came from many sites:

Endless thanks to the long hard work Derry put in creating this site so that it is JUST PERFECT, beautiful, and works well. I am pretty much an “I do it all myself” business….except I made a smart decision in 2003: to go with Gloria Hansen and Derry Thompson to design and host my site. I have learned so much since 2003, a lot from these two. I never have to worry if a glitch happens, Derry fixes it. I actually scold him for answering late at night and on weekends: dude, you need to take some time off! Hoisting a pint to you!

Thanks for looking and reading this far….I hope you enjoy the new site!

Can you tell it’s been busy?  Whenever I disappear, that means so much life is happening I don’t have time to blog.  I’ll try to catch up a little bit at the time.  First things first…the catalog is out for classes at International Quilt Festival in Houston!!!!! Here’s my very busy line up!

Houston has revamped the catalog a little bit. There are now (yeah!) pictures in the catalog (not just online) and there are weblinks so you can go to my website for the FULL supply list and handouts.   To shorten the process, if any of the above look good to you, you can go to my class listings page here for info about my classes.  Each description has a hotlink to the pdf Supply list.  If I have blogged about a class, that also is in the description.  You can also find all my supply lists in one place on my Resources page.  If you click on “Resources,” Look at the jump links at the top.  Click on Class Supply Lists and it will jump you down the page (instead of having to scroll down).

I’m thrilled to be so busy and hope to meet many of you.   I will do a separate blogpost to go live in a couple days about The Nest, a new and totally fun half-day (or full day if a guild wants a full day) class, and my fairly new Easy Peasy bag class.   Can’t wait!

Especially in my house!  Think rural.  Think cats.  Think Sarah.  But you don’t want dust inside your sewing machine!  I was so happy when editor Kit Robinson asked me to do an article on the care and feeding of your domestic sewing machine.  That article has just come out in the March/April issue of Machine Quilting Unlimited: 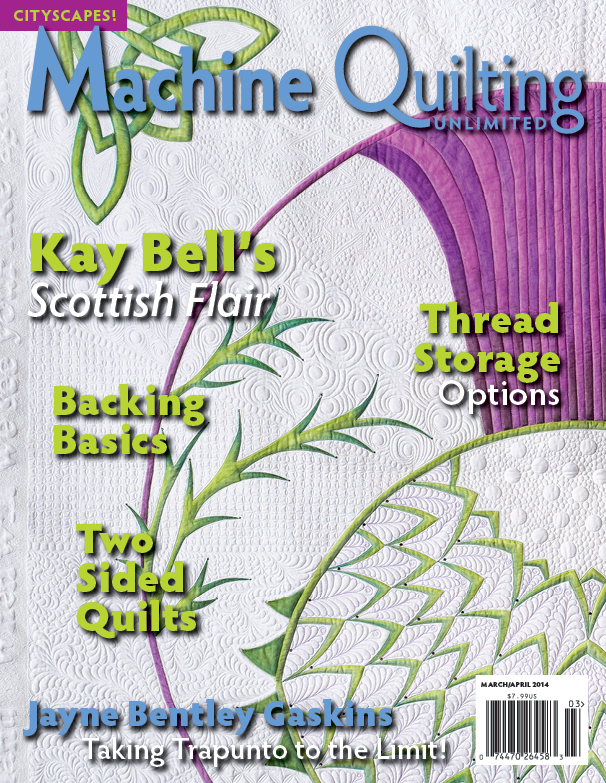 Machine Quilting Unlimited March/April Issue with my article on dust along with other great articles. LOVED the one by fellow-Mainer Margaret Solomon Gunn on scalloped bindings and one on Jenny Bowker’s quilts.

I was even more elated when just a few days after copies arrived in mailboxes across the US, Publisher Vicki Anderson forwarded this email to me:

My wife just received her March/April 2014 issue and I want to compliment you on the Sarah Ann Smith article titled Dust Happens.

I am a Bernina Certified tech that repairs anything that walks in the door and all brands of Long Arms. I also give presentations to the local guilds on Care and Feeding of your Domestic Machines. Her article is the most comprehensive that I have read to date. I feel as if she had a copy of my Power Point in front of her (right down to the needle photos!).

Outstanding! I agree with 100% of what she said and applaud her for the article.

Please use this and pass this along in any way that you see fit.

WOW! Talk about a HAPPY RUSH!  You all know I’m a Janome girl, but we also all know how GOOD Bernina is in terms of service and support, how good it’s repair folks are.  To have a Bernina Tech say that about my article just gives me goosebumps!  Thank you Mr. Sellers!

Here’s a peek at my article–to read it you’ll need to get a copy, which you can do online at mqumag.com or in places like Barnes and Noble or Books-a-Million. 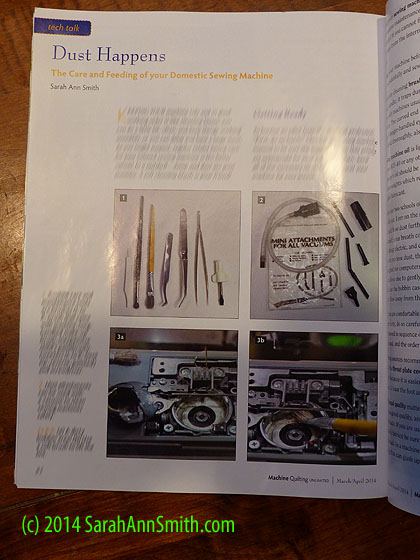 The first page of “Dust Happens,” my article about caring for your machine. Just a few moments every time you use your machine will keep it much happier!

And HUGE thanks to Marie Z. Johansen (BFF!) and Silvia Dell’Aere (a.k.a. Orkaloca) for photographs used in the article.  I needed a specific view of a Bernina bobbin case and, astonishingly, despite having hundreds of photos available for press use, Bernina didn’t have the view I needed, so I called Marie–who is a fabulous photographer–and asked if she could save my bacon and photograph her Bernina’s bobbin case (right before deadline no less), and she did!  THANK YOU!  And Silvia has allowed me to use a photo of hers of the tips of new vs. slightly used needles in my class presentations for years.  I asked for a print-resolution photo, but she had to take a new one–Thank you!  So please, visit their blogs and say thanks! Here’s the page with their photos: 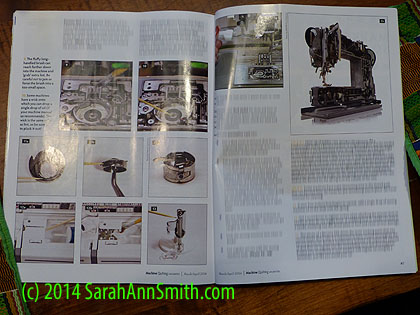 Two more pages from the article. In the “nine patch of photos,” Marie’s photo is middle row, right. Silvia’s is on a different page.  Thank you both!

Have another article in the next issue of MQU..it’s been a good year for writing (which I love as much as quilting).  Thanks, Vicki and Kit, for the opportunity to write for MQU.  I’m so happy to have been able to bring good articles to you.  Thanks also again to Mr. Sellers for taking the time to write such a nice comment! 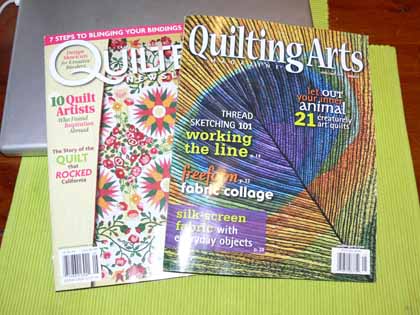 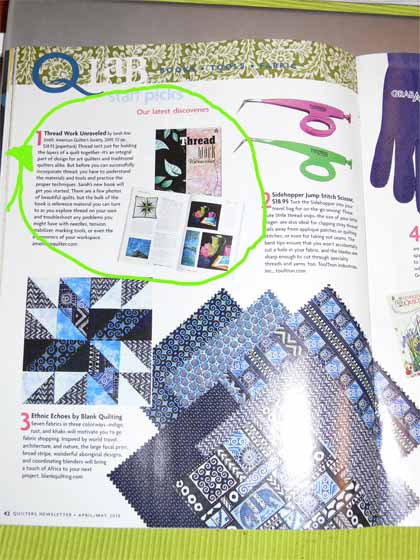 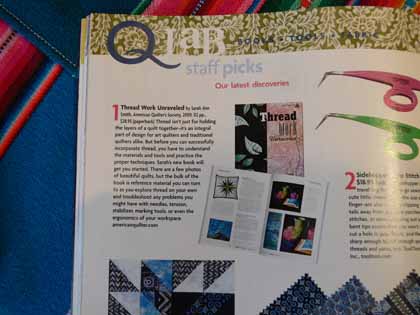 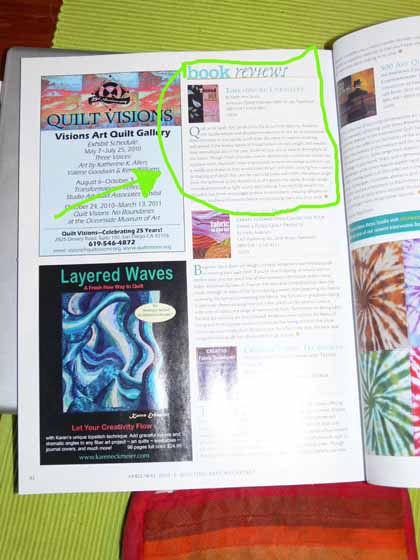 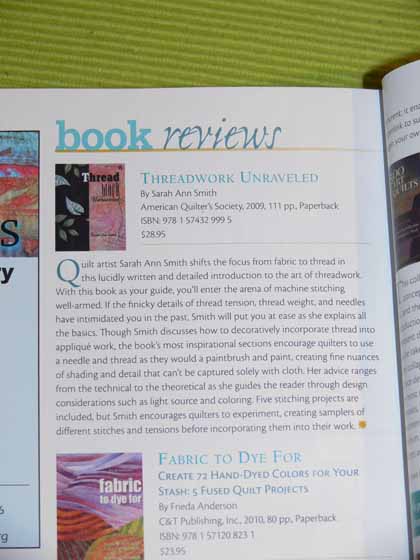