Archive for the ‘Published!’ Category

What a delight it was to be invited to tape a show for the Ricky Tims and Alex Anderson online “tv” show, The Quilt Show (TQS)! In the past I have taped for two seasons of Quilting Arts TV (on PBS) and did a video workshop for Interweave (Art Quilt Design from Photo to Threadwork, available as a download), but TQS is on a whole other level of professionalism. It was filmed in the Comcast center near Denver…as you walked by the main office there was an entire cabinet of awards including a few Golden Globes! And to get it up front: THANK YOU ADELE Merrell for all these great photos and Gayle Schliemann from Bernina for a bunch more!

I have to say, I wasn’t all that nervous thanks to being UBER prepared and having done Quilting Arts before, but I was wired for sound LOL..by the time of the Q&A I was relaxed and ready to have even more fun sharing.

My episode will air sometime in late summer/autumn. Star Members of The Quilt Show will have the first view, then there will be one week where the episode will be free to everyone. I will be sure to post, but gosh there are so many wonderful guests that I am so glad I am a member–and did you know I joined the very first day TQS began: January 1, 2007? And now, here I am as a guest! WOOT! Life is GOOD!

Sarah on The Quilt Show!

Yep, 2019 is shaping up to be a great year because I’ll be able to tick off a Bucket List item: in early April I’ll tape an episode of The Quilt Show with Ricky Tims and Alex Anderson! Here’s a preview I taped with Ricky while I was teaching at International Quilt Festival 2018 in Houston last November. I’m so psyched–gosh they made my work look SO GOOD!

Interview with Ricky Tims about my upcoming visit to TheQuiltShow.com . I’ll tape the episode in April and it will air later in 2019, I’m guessing towards late summer or fall (August to November for those not in the northern hemisphere). If you’d like to get my monthly newsletter, sign up on my home page, here.

We haven’t finalized the topics yet so can’t share what it will be, but it’s bound to be something along the lines of art quilts, painting, fusing and/or quilting. I know I can’t fit in everything, but I hope to inspire you and maybe even generate some teaching jobs. If your group or show is interested, please contact me using the contact page on my website. And if you’d like to follow this blog, please click on one of the options to subscribe in the sidebar to the left.

And OMG: SEE YOU ON THE QUILT SHOW! Yep, I’m shouting in delight!  Thank you Ricky, Alex, Justin and John–can’t wait, and some quilty friends will be there for taping too…SQUEEEE!

An Apple for your favorite teacher

Recently made up a VERY quick and easy project for Janome America which is free for you to use… a felt apple pin for your favorite teacher.   Of course you could also make it in woven cloth, a lovely wool, anything you like, but a wool felt is fast, Fast, FAST…and fun! 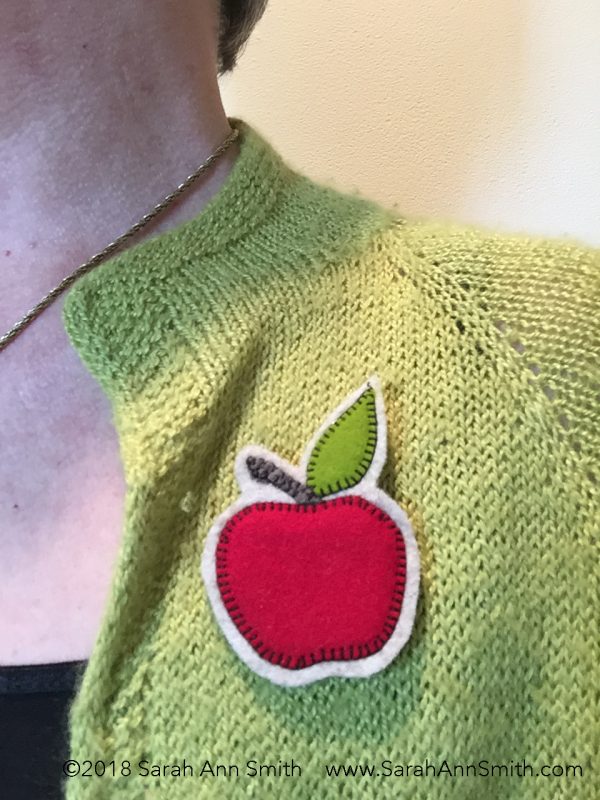 I used leftover bits of felt–you could use black for the backing instead of the oatmeal felt I had, anything you want!  Including drafting the apple and sewing on the pin backing I think this took all of an hour to make. 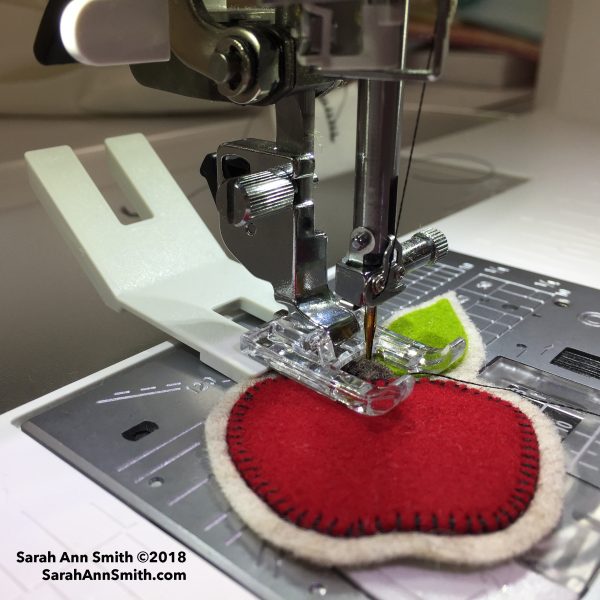 The blanket/buttonhole appliqué stitch on my Janome 9400 make this quick and easy.

To find full instructions with more pictures, details and tips, visit the Janome blogpost for this project, here.

Thanks as always to Janome America for their support.  I’ve sewn on Janome machines for 15 years now, and they are the best.  Currently I’m using the 9400 and it is my dream machine! 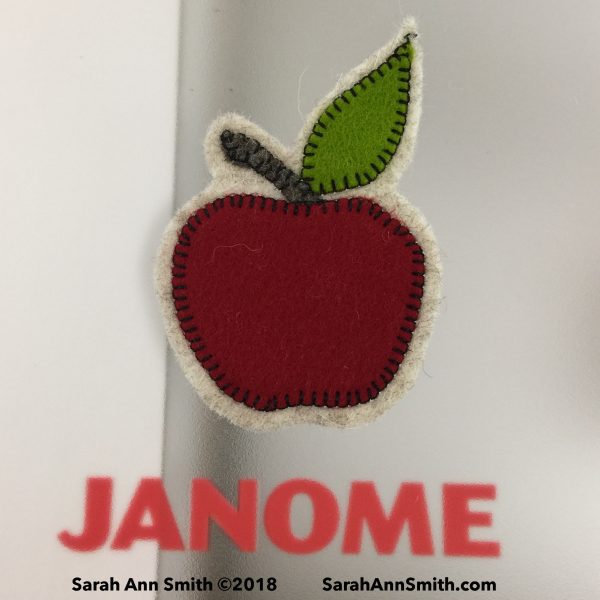 Posted in Applique, Crafty, Favorite Products, Janome, Published!, Techniques, Tutorials | Comments Off on An Apple for your favorite teacher

Delighted to share that I have a new article, “Use you camera as a Design Tool” in the August/September 2018 (just came out) issue of Quilting Arts magazine.  The article is inspired by my “Inspiration in the Ordinary” lecture which encourages quilters–traditional, art, modern, any and every kind–to look for inspiration in the world around them.  All the photos in this quilt and in my lecture were taken in my daily dog walkies and a couple forays (to the farmer’s market). 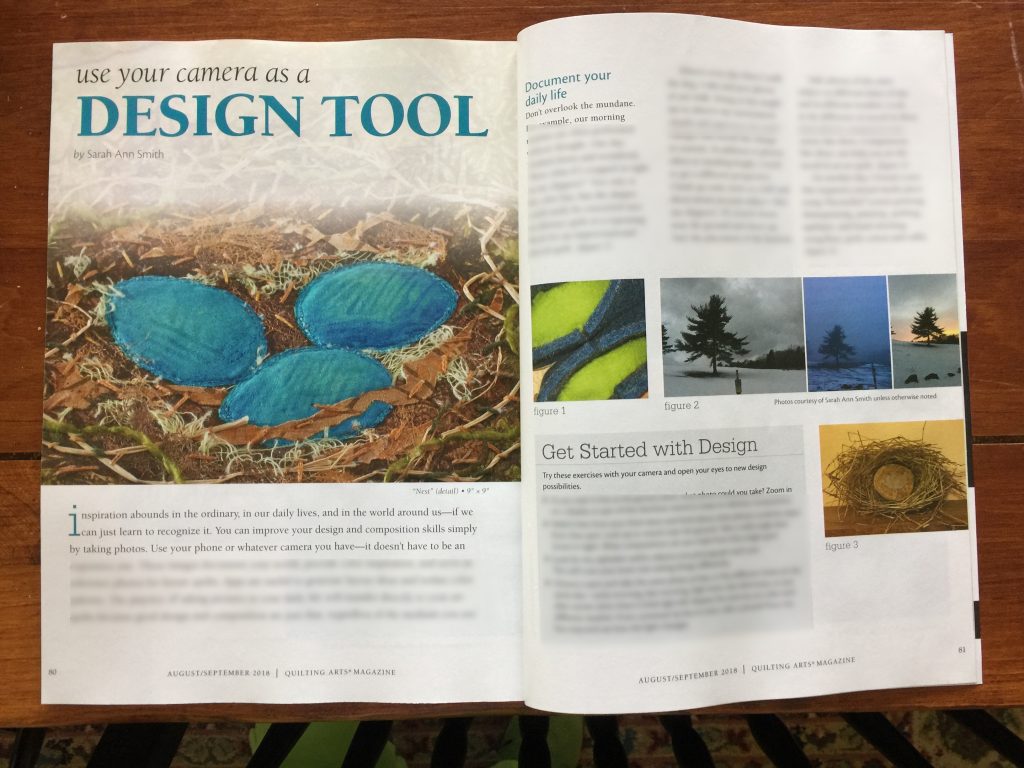 Delighted to be published in Quilting Arts magazine again…gosh, I just realized the first time I was published in QA (and in a national magazine ever) was twelve years ago! 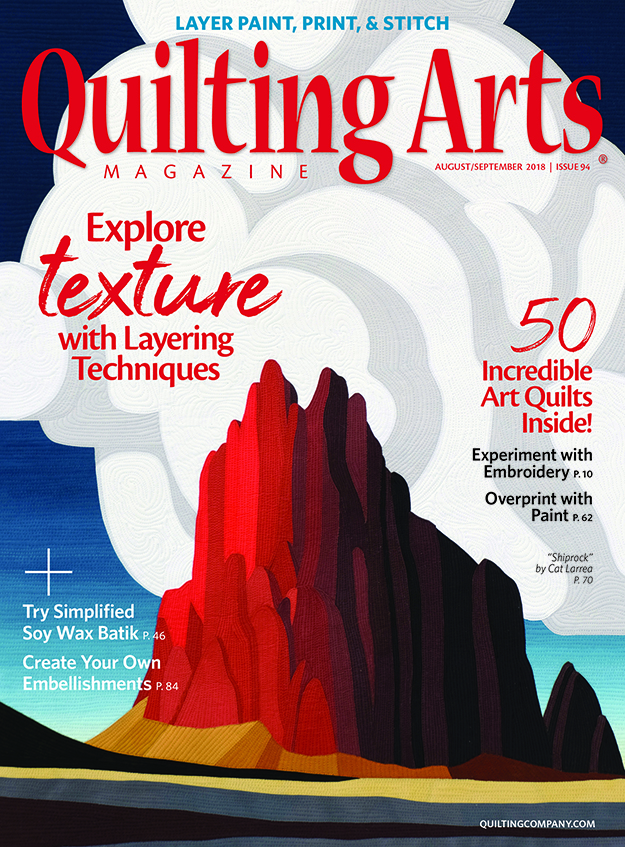 The cover of the issue with my article and some great ones by friends that I can’t wait to read!

There are examples of my world (including my slippers), some challenges for you to try to think, or re-think, how you approach design.   After all, good design, a good composition, is just that.  It doesn’t matter if it is a photograph, a quilt, a painting, a garden.  The same principles apply.  In the next couple of weeks I’ll share a few more tidbits that didn’t fit into the article so by coming to my blog, you get even more!   Here’s today’s tidbit:  pause briefly and take three shots changing only the horizon line.

Look at what a difference changing the horizon line makes in your composition. Three quick snaps with your phone on a dog walk to practice design.

I’ll be back soon with more tidbits!